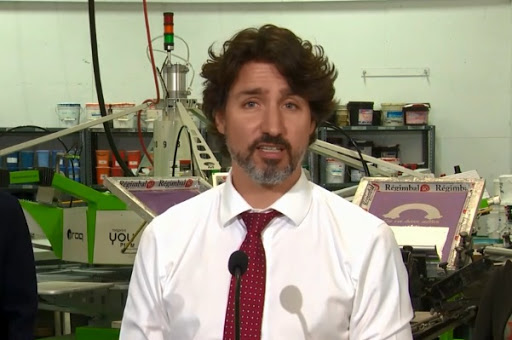 The Prime Minister started his daily address blaming the Conservatives for standing against the bill for the one-time $600 support for Canadians living with Disabilities.

Justin Trudeau said all parties agreed on the legislation, except for the Conservative party, who he says, “didn’t even allow the house to debate it.”

He says $117-million will help small and community-owned Indigenous businesses and $16-million is for the tourism industry, with the Minister of Indigenous Affairs giving more details later on Thursday.

Trudeau also said later Thursday, the Minister of Infrastructure and Communities will be making public the amounts of funding announced last week as part of the accelerated municipal funding.

These funds will be available for communities, and according to Trudeau, the federal government has already delivered this money to the provinces and territories.

The Prime Minister was then asked about comments made on a CBC news interview by the RCMP Commissioner on Wednesday.

Brenda Lucki said the definition of systemic racism was not clear to her, to which Trudeau says, “Systemic racism is an issue right across the country in all its institutions.”

Trudeau says this extends to all police forces including in the RCMP, he says “that’s what systemic racism is, in many cases, it’s not deliberate, intentional, or aggressive individual acts of racism; although those obviously exist.”

He says it is recognizing that the systems built over the past generations have not always treated people of racialized backgrounds and of Indigenous backgrounds fairly.

Trudeau says it’s so difficult to address because “It does require us to look at the very building blocks of our institutions and of our country and saying OK this outcome isn’t quite fair, we’re not quite bringing in or creating enough success for everyone, and the people of privilege are having an easier time than those who discrimination.”

He says it’s a difficult and even uncomfortable conversation.

Trudeau had a clear message to those who say, “Well it’s painting all our institutions with a negative brush and it’s not being proud of the Canada that we built and that our ancestors have built.”

He states, “Nonsense!”, Trudeau says Canadian exceptionalism is knowing that “This country remains a work in progress that we can and we must do better on.”

The Prime Minister says the challenge with systemic racism and systemic discrimination is that it’s very hard for people in these institutions who believe in what they do to recognize the extent of the system’s bias.

***With files from Mo Fahim