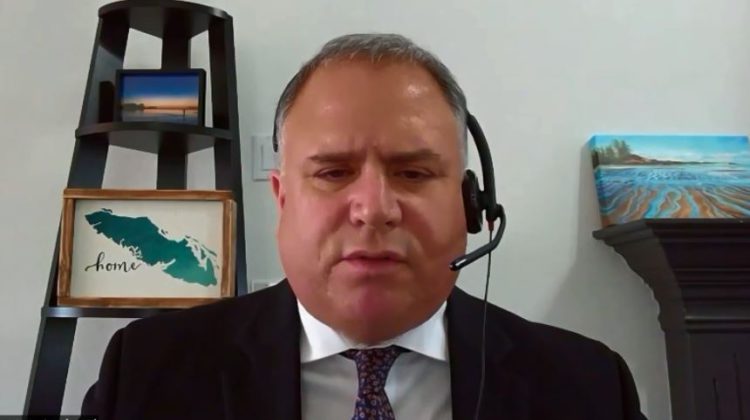 Courtenay-Alberni MP Gord Johns is pushing for federal funding to help keep the Kus-kus-sum site out of private hands.

During a virtual parliamentary committee on Fisheries and Oceans on Wednesday, Johns pressed Fisheries and Oceans minister, Bernadette Jordan, concerning what he calls “the critical importance” of federal investment in the Kus-kus-sum Estuary Restoration Project in the territory of K’omoks First Nation (KFN).

Project Watershed, in partnership with KFN and the City of Courtenay, entered into an agreement with Interfor to purchase and restore the former Field Sawmill site on the Courtenay River near the 17th Street bridge.

The project site is called Kus-kus-sum – meaning tree burial – in recognition of its traditional use by the K’ómoks First Nation as the final resting place for their ancestors.

The project partners intend to restore the former industrial site to saltmarsh, side-channel, and riparian habitats, supporting the recovery of fish and wildlife species, and mitigate flooding in the region.

The overall costs for the acquisition and restoration is roughly $6.5 million.

Johns said this acquisition and reclamation of the former Field Sawmill industrial property is important to fish and wildlife, including Pacific wild salmon.

A partnership of K’omoks First Nation, City of Courtenay, Comox Valley Regional District and local groups has raised 1 million dollars towards its purchase. The province will contribute $1 million to match a similar federal contribution.

Johns said the project is a worthy investment.

“If the federal government is able to find $34 million to deal with the catastrophic landslide at Big Bar and if it is able to find $17 billion to buy a pipeline and tanker project, it is hard to understand why it can’t find $1 million for one of the most important conservation projects on Vancouver Island.”

Time “is running out,” Johns said, adding that the province is going to end up with its $1 million dollars back, even though it knows this is “a good project.”

“The deadline was supposed to be the end of the month to buy this property, and instead it’s been moved to the end of August,” he said. “We’re looking at losing a really important project not just for salmon, but for reconciliation.”

He says if federal funds are not forthcoming, the property could be sold for private development.

The Minister responded that her department does not have a program to provide funds to acquire land.

“We’ve had this discussion before,” Jordan said. “It’s important to recognize that DFO does have a suite of programs (and) this does not fall into them. We have had the conversation with regards to being involved with environment and climate change on this. We are looking at ways to support it, but DFO does not have the ability to buy a piece of land.”

“Right now we’re in a salmon crisis (and) that’s the most important restoration project on Vancouver Island,” he added.