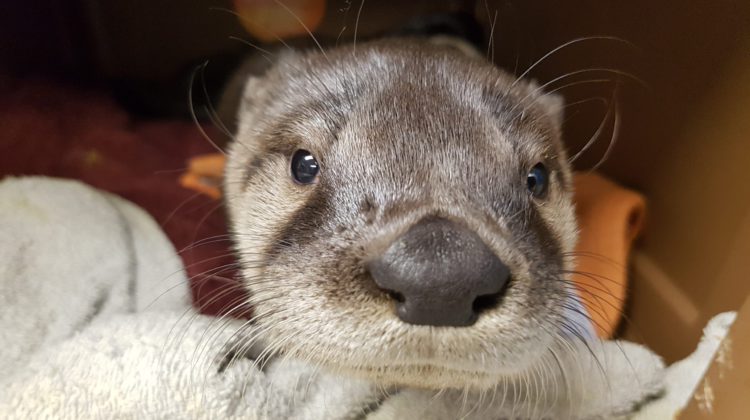 Things could have turned out a lot worse for a pair of juvenile river otters, if not for the keen eye of a passerby in Comox.

He spotted them on the side of Lazo Road on June 12th and kept them from shuffling into traffic until help arrived.

Estimated to be between five and seven weeks old, they’re being cared for at the MARS Wildlife Rescue Centre.

“I think they could have been struck by a vehicle or they might have been just wandering around without being fed,” Andersen said. “So it definitely wouldn’t have been a good thing for them to be on their own. It’s very good that he was able to spot them and keep them safe until we were able to get there.”

She added that the river otters didn’t want to stay in one place.

“He stayed with them until we were able to get there to capture them. They kept trying to climb up onto the road and they appeared disorientated. They wanted to get on the road and lie down, so he kept an eye on them.”

The otters were thin and initially very dehydrated and lethargic when they came to the centre. On top of that, they had conjunctivitis in their eyes.

Andersen said the first priority was to ensure they were stabilized,  hydrated, and cleaned up “because they clearly hadn’t been with their mom for a while.”

“They have little tiny teeth but they are not quite ready to eat on their own yet so they’re needing bottle feeding,” Andersen said.

Their prognosis is good, according to Andersen: “They are drinking well, they’re hydrating now, their conjunctivitis seems to be going away. It was fairly minor and that could have just been related to them being dehydrated and not being cared for by their mom.”

The otters are on the move.

The plan is to fly them by helicopter tomorrow to the mainland, where they’ll be kept at Critter Care Wildlife Society facility in Langley.