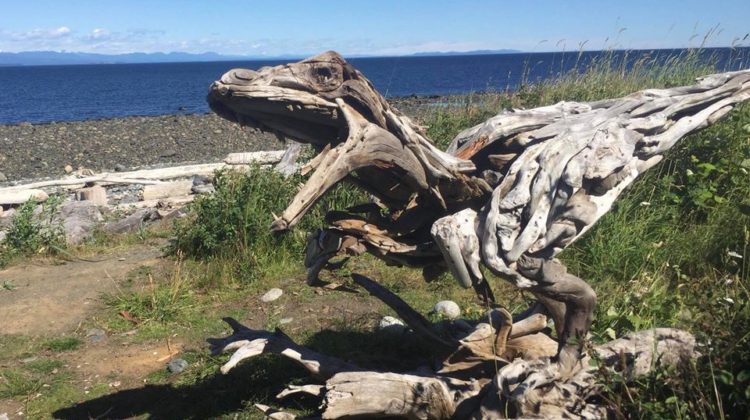 A popular piece of driftwood art in Campbell River is in shambles.

Created by Alex Witcombe of Drifted Creations, Sarah the Raptor was ripped apart by vandals in Willow Point sometime over the weekend.

Witcombe heard about the destruction while he was at one of his driftwood creating workshops on Quadra Island.

“One of my students from the courses emailed me saying there was possibly some damage and vandalism to Sarah the Raptor,” he said.

Witcombe’s girlfriend surveyed the damage and confirmed the bad news.

“We Face-timed and she said it was pretty brutal what happened,” Witcombe said.

He noted that the damage is quite severe.

“Sarah’s neck has almost been ripped off, her front arms have been torn off, all of her teeth broken out, and she’s been moved from her position. It’s pretty bad. I don’t even know if it can be a rebuild.” The driftwood sculpture, Sarah the Raptor was the target of vandalism in Campbell River’s Willow Point area. (Drifted Creations, Facebook)

Witcombe realizes that when he puts his art on public display, there is always the danger of vandalism.

“I’m aware that there is potential for this stuff to happen,” he said.

However, Witcombe said the positives of having his art in public “far, far, far outweigh the very few incidences that occur with damage and vandalism, so I just try to focus on that.”

Sarah was a public art gift to the community and Witcombe said it is so sad to see the deliberate destruction of a creation that brings joy to so many.

As for how long it took him to put Sarah together in the first place, Witcombe said he didn’t count the hours or days.

“I just go for it and kind of lose track of time when I’m doing so,” he added. “And particularly, there’s so much collecting of driftwood on the beach that, I just don’t count the days or the hours because it’s beautiful out there and I’m just in the now.”

If Sarah is too badly damaged, Witcombe said he will take her apart and return her bones to the beach.