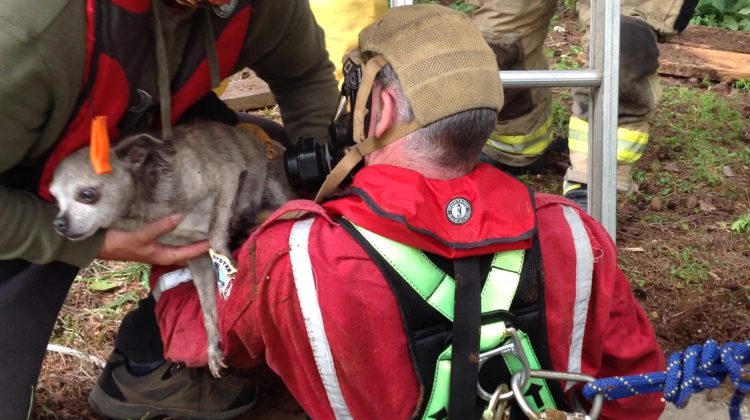 A Chihuahua is at home, safe and sound, thanks to the Oyster River Fire Department.

The department was called Sunday afternoon to rescue the toy dog that had fallen 20 feet down a well in the Fosgate Road area. A Chihuahua was shaken but not hurt after falling down a well in Oyster River on Sunday. (Supplied by Oyster River fire chief Bruce Green)

Fire chief Bruce Green said they lowered a 25-foot ladder down to grab the pooch.

Green noted that the dog was lucky it didn’t have to tread water as it waited for its rescuer.

“Fortunately, there was a log that the dog had been able to stand on because it sounds like he was down there for quite some time,” Green said. “Well rescues are something we don’t generally do, but it was shallow enough that we were able to get our ladder down there safely.”

Before deputy chief Chris Murray climbed down the ladder to get the Chihuahua, the department lowered its oxygen gauge to make sure it was safe for him to go down.

The dog jumped into Murray’s arms.

Once he was back on the surface, it was handed over to one of the firefighters who is also a vet tech, for a quick once-over. The dog seemed to be in good spirits considering the ordeal, and Green reported that the owner was happy to be reunited with their dog.

Green said this is the department’s first Chihuahua rescue of the year.

“It’s usually cats up a tree, not dogs down a well, but we’ve had a couple in the past where dogs have been stuck on the other side of rivers or something like that, so it’s not unheard of but it’s very rare that we do these kinds of calls,” he added.

Green said it was a satisfying rescue. “It’s nice to be able to do the small things that bring great joy to people. It’s their pet, it’s part of their family, they care greatly about that animal, so for us to be able do that for them, it’s a great feeling for the firefighters, as well.”