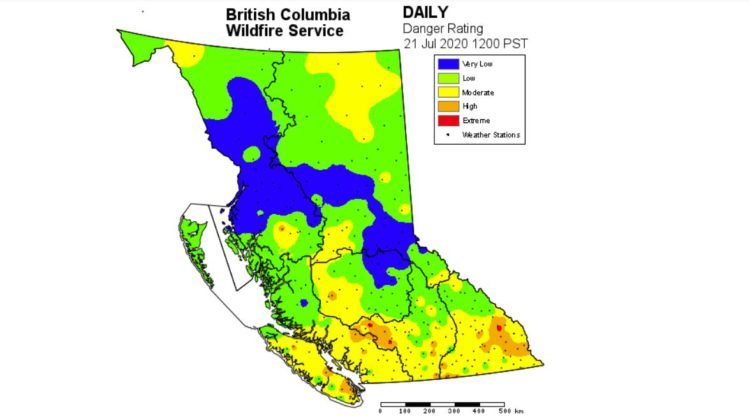 The fire danger rating is climbing across much of the Coastal Fire Centre.

Fire information officer Donna MacPherson said the situation has worsened due to the dry weather and warm temperatures that we’ve been experiencing, of late.

“Most of Vancouver Island is in moderate, and we’ve got spots of high showing up on the southern parts of Vancouver Island from about Nanaimo south to Victoria on the east coast, and then another small spot that’s up near Bowser, as well,” she said.

Despite the recently elevated wildfire risk, it’s been a quiet season across the region, thus far.

Within the Coastal Fire Centre, 237 hectares have burned since April 1st, which is considerably lower than the 10-year average of 4,854 hectares as of July 21st.

MacPherson thanked the public for doing their part.

To further reduce the risk of wildfires in the region, most open burning activities will be banned throughout the Coastal Fire Centre effective at noon Friday.

“This is driven by the conditions in the forest,” she said. “We measure how much precipitation it’s gotten and how dry it is, and we also look forward a little bit to what the weather is in the future forecast and we’re now at the point where we needed to prohibit these types of fires.”

However, campfires will still be allowed, depending on your jurisdiction.

This prohibition applies to all public and private land, unless specified otherwise (e.g., in a local government bylaw).

“Have it on good mineral soil, never walk away from your campfire, and have ways of putting it out with shovels and rakes and a good water source. Most importantly, when you walk away from it, make sure it’s out cold to the touch because what you think is just smoldering will come back again once that water evaporates and that fire is flamed by a little bit of wind.”