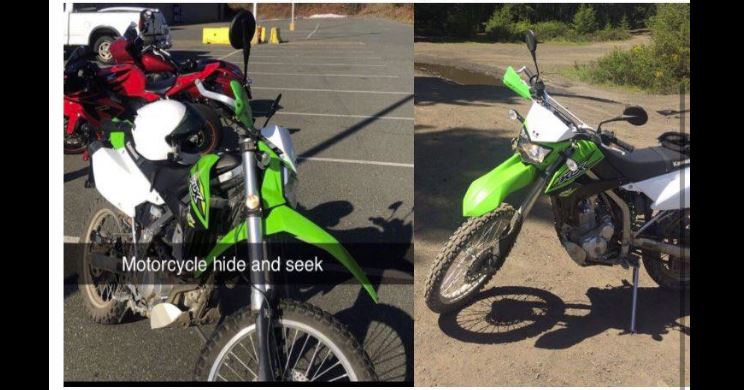 A Cumberland man is sounding the alarm about motorcycle thieves in the Comox Valley.

Cross said he isn’t the only victim.

“As far as I know in the valley, in terms of friends and people I know, there have been… five thefts in the last month,” Cross said.

In his case, Cross came home from a short camping trip on June 14th, and quickly realized that his motorcycle was missing.

“(I was) kind of checking all the usual spots, a couple of various houses in the valley, and I ended up putting posters up around and I’ve gotten a couple of leads here and there, but nothing really concrete,” Cross said.

Cross said his motorcycle has special meaning to him. “This is a bike that I had bought with my dad in the second year of him recovering from a stroke. I bought a Kawasaki and he bought a KTM, and so, to me, this is a lot more than just a motorcycle at this point.”

Cross reported the theft to the Comox Valley RCMP, who he said has been “great in a lot of ways but they’re saying unless you steer us in a direction or it comes across somehow, you just have to be vigilant and hope someone somewhere has seen something.”

On June 9th, the same thing happened to Cross’s friend, who is missing his $12,000 Husqvarna.

“His bike ended up going missing right out of his property on Back Road,” Cross said. “Apparently someone had seen someone basically breaking the steering lock and walking away from it and his bike disappeared, too.”

Cross is now cautioning others to be extra vigilant around their property.

“At the place I’ve lived in in Cumberland, lots of people I know don’t lock their house, they leave their keys in their vehicle, and I would say unfortunately, it seems to be that kind of time right now when you have to lock it up,” Cross said. “If I get a replacement bike I’m putting multiple locks up on it and I’m chaining it to whatever I can.”

He added, “that’s my biggest recommendation to everybody is just invest in a $100 lock, because you want to make your bike as less appealing to steal as possible, so if they have to make noise or if it takes time…because it’ll take them 30 seconds, that’s all they need, is two guys to just throw it into the back of a truck or a van and your bike’s gone.”

He added that you must get theft insurance because it’s the best piece of mind that you can get.

We have reached out to the Comox Valley RCMP for a response.