Man charged after throwing box of cereal at bear in northern B.C. 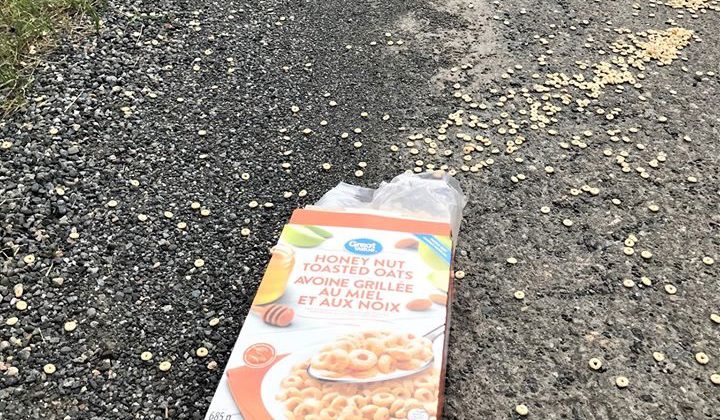 That’s the message the B.C. Conservation Officer Service (BCOCS) is trying to get across after a man was caught tossing a box of cereal to a bear along a highway in northern British Columbia.

A passing driver “witnessed the action along Highway 16 near Kitwanga and called police.”

The information was then relayed to Skeena conservation officers who were in the area on patrol.

“Officers followed up at the individual’s home, where he was handed a $345 ticket,” the BCOCS said.

Under the Wildlife Act, it added that it’s an offence to feed dangerous wildlife and “doing so creates a serious risk to public safety and the safety of the bear.”

Gylaine Andersen, manager of wildlife rehabilitation at the MARS Wildlife Rescue Centre in Merville says “people are usually quite tempted to feed wildlife because they naturally care about them and it’s interesting to see them up close, but it’s really not a good idea.”

“The main problem with feeding bears is that it habituates them to people, so it conditions them to seek out people as a food source,” Andersen says. “That gets them into all sorts of trouble and human conflict.”

Anyone who witnesses someone feeding wildlife is asked to call the B.C. Report All Poachers and Polluters (RAPP) line at 1 (877) 952-7277.