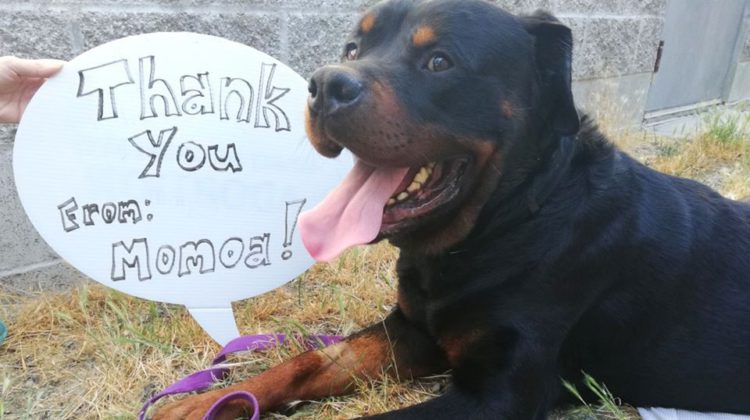 Photo supplied by: BC SPCA/Facebook

The BC SPCA is seeing an outpour of donations after a seriously injured Rottweiler was found roaming around the Campbell River Waste Management Centre.

He was recently brought into the Comox Valley SPCA branch after a “good samaritan” spotted him at the landfill.

“As soon as Momoa arrived at the shelter, it was obvious to staff that something was wrong with his right hind leg,” the SPCA says. “After being examined, it was discovered he had a full tear in his right hind ACL, a crucial ligament in his knee.”

A veterinarian believes the dog has been suffering from the injury for at least six months.

Momoa was given medication right away to help with his pain, but according to the SPCA, he’s still in “considerable pain due to his injury.”

Soon, he’ll undergo a complicated procedure called a TPLO which the SPCA says will help to stabilize his leg.

“Momoa’s recovery time will be lengthy as he will need to take it slow and will have to be carefully monitored to make sure his incision site is healing properly.”

After surgery, he’ll be put on cage rest with short walks to help strengthen his leg muscles.

Staff at the Comox Valley SPCA add that they “have fallen for this gentle giant.”

“He’s cuddly, happy go lucky and very loving. Despite his injuries, Momoa will make sure to limp over to anyone who is nearby for pets with a big goofy smile. We are so grateful that he was discovered and is now getting the medical care and love he needs.”

To help with Momoa’s medical costs, pet insurance company Petsecure offered to match donations up to $2,000.

“That covers more than half his medical costs, with any donations above and beyond going towards the next animal that will inevitably walk, or limp, through our doors,” the SPCA says.

Donations for Momoa can be made here.