Fall webworms are back in season 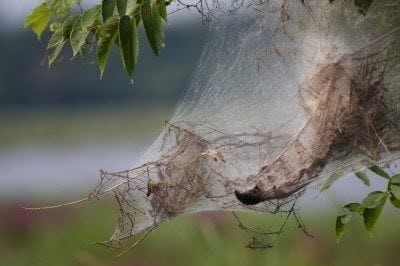 Have you noticed trees in your area covered in what looks like spider webs?

The culprit behind the stunning spectacle is actually fall webworms.

They are a native moth in the region and make a similar nest as tent caterpillars but with a couple of differences: the nests appear later in the season, and the nests expand so that the caterpillars can feed inside the protective nest. Usually, they cause little lasting damage to the trees.

The webworms are consuming leaves, and while this is somewhat stressful to the tree, the growing season is nearly finished for the year, and the leaves will grow back next year.

If they are in your yard and you would rather see them gone, there are a couple of tools to get rid of them.

One method that is used for tent caterpillars is to spray a biological insecticide – actually a bacteria – called BTK.

This bacteria is sprayed onto the leaves on which the caterpillars would then feed. However, this solution can be less effective on fall webworms because the leaves they are consuming are inside the protective webbing which inhibits some of the BTK solution reaching the leaves.

Another potential solution for removing the webworms is pruning them out of the tree.

Some parks staff advise that, unless the webworms are pruned out at the beginning of the season when the nests are still small, this option is generally more stressful for the tree than letting the worms eat the tree leaves.

The tree will grow new leaves again next year, but pruning material out of the tree may remove branch tissues that have taken the tree several years to grow, and would take the same amount of time to replace.

So, although the webs in the trees might look like they are very stressful for the trees, they generally don’t cause lasting damage and are more of an aesthetic issue than a tree health issue.

Find out more about fall webworms from Natural Resources Canada.