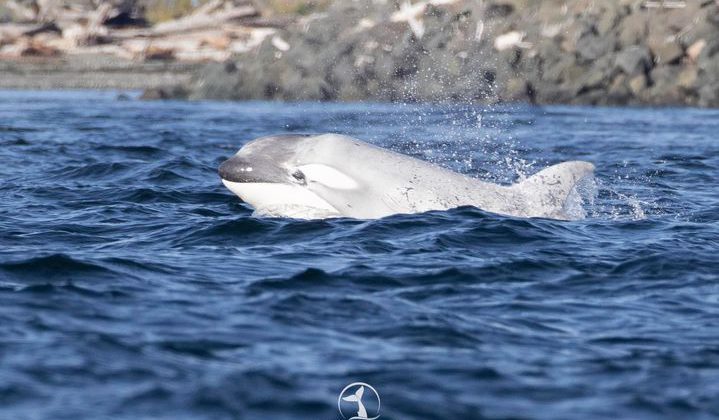 While on a Zodiak in Campbell River’s Discovery Marina, Stan Novotny snapped photos of a white orca.

Novotny says the orca is almost one of a kind.

“It is rare to see this kind of whale,” Novotny said. “There are about five of these whales in the world – recorded in the world, anyway – and it’s not an albino whale. It’s got a pigmentation issue with its skin, so you can kind of see a little bit of black outline along with the white.”

He said it was recently in Alaska and was passing with its pod through Campbell River.

“We were able to see it which was nice,” Novotny said.

Novotny works with Eagle Eye Adventure Tours and got a report that the whale was in a pod heading south.

“So we headed out and we, of course, keep our distance for whales,” he added. “We can’t approach them or get too close. We stay at least 200 metres away with a permit.”

Asked if it was a once-in-a-lifetime opportunity, Novotny replied, “it could be.”

“These transient orca whales are pretty random before they will show up.  And of course, it’s not easily spotted, especially if there is rough weather, but they are in and out of town on a regular basis, cruising around the island, itself, heading south into the states.”

Novotny said seeing the whale is a bit of a shock because he’s so bright compared to his brothers and sisters in the pod, as well as his mom.

“Its mom is a regular coloured orca whale with the black and the white so it really stands out when you see it travelling alongside its mother.”

The orca is named Tl’uk, a Coast Salish Halq’eméylem word for moon.