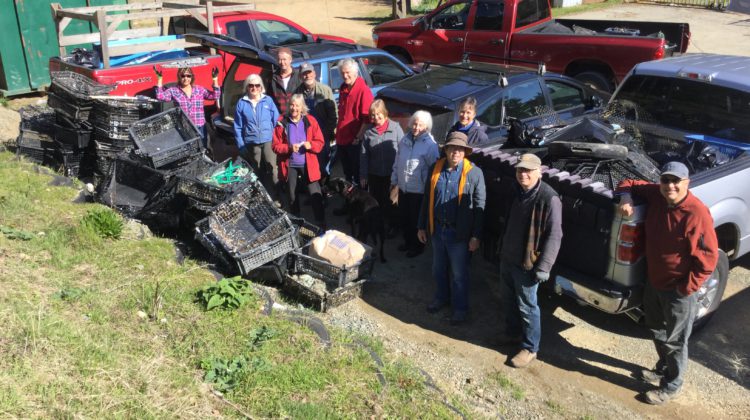 Photo of volunteers from a past Hornby Island beach cleanup. (Supplied by Joanne Wyvill)

Joanne Wyvill is organizing this year’s cleanup. She says the island’s beaches aren’t as pristine as they seem.

“If you just walk the shoreline near the water, you’d think they are perfect,” she said. “But then you start to go back into all the logs that wash in, and they trap things. If you go and look between the logs on any of the actual beaches, you’ll find micro-plastics and bits of plastic, bits of old rubbish, Styrofoam, and often cans and bottles and things left between the logs.”

Wyvill has also noticed more pieces of clothing and towels left on the beaches this year than before, which is something she can’t explain.

The beach cleanup is an annual event but this year, it’ll be ‘physically distanced’ because of COVID-19.

Volunteers will form their own groups or pairs with those they are already ‘bubbling’ with, or comfortable being with, and choose their own stretch of shoreline to clean.

So far there are around 25 volunteers taking part, which isn’t all that far off from past years.

If you want to take part, you’re asked to gather garbage bags and put on gloves and closed-toe footwear.

To make sure there aren’t loads of people in one spot, and to know which stretch of shoreline are being cleaned and to arrange garbage bag pickup, you’re asked to contact Joanne Wyvill in advance (email: jjwyvill@gmail.com or 250-335-1508).

Wyvill said she is taking on a job that she wouldn’t ask anyone else to do.

“There’s a big block of Styrofoam down on one particular stretch, and it’s breaking up into many pieces, and I’ve spent, already, I would say in the past few months, 10 or 12 hours picking bits of Styrofoam out of the rocks and out of the logs and out of the beach and I’ll be doing that again this Saturday.”

This year, Wyvill said she’s seen a disturbing trend of disposable masks thrown all over the island.

“I think people put them on because they have to wear them in a particular spot and then just chuck them out the window, which is a very discouraging thing. So some of our roadside verges look terrible, as well, but I didn’t include that in the shoreline cleanup,” Wyvill said.

“So if somebody happens to be driving about and notices any garbage anywhere, it would be great if they could pick it up.”