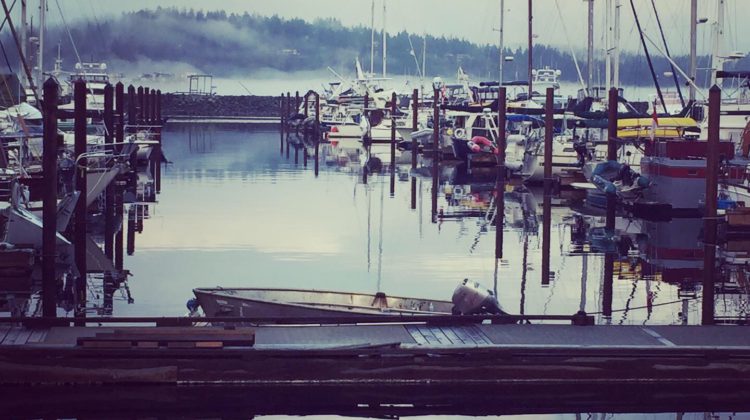 The air is clearer across B.C., including the waters off of Campbell River. (Troy Landreville, Vista Radio staff)

We can see clearly now, the smoke is gone.

And by the looks of it, we likely won’t be seeing it again.

“It’s pretty much done,” Lundquist says, about the wildfire smoke from the U.S. that caused our air quality to rise to 10-plus, or very unhealthy, for much of last week.

“And I don’t think we’re going to get it back. We’re getting into that pattern of really heavy rain and showers. It’s that typical fall pattern. The flow is coming out of the west, it’s nowhere near where the fires are, and to top it all off, we provided rain all the way down to basically southern Oregon over the past few days with that last system.”

Lundquist predicts that we should batten down the hatches with a heavy dose of the wet stuff on the way, starting mid-week.

“I think we’re going to get several centimetres of rain, like, let’s not even talk millimetres, here,” he said. “The main event starts on about Wednesday when we have a system move in. It’s going to have sub-tropical moisture.”

He said the west coast of the island could see heavy rain to the tune of possibly well over 100 mm, with a bit less falling on the east side of the island and Sunshine Coast.

“I do worry about the rainfall amounts,” he said. “We are going to put out warnings… but it’s looking really high, so I start to worry about local washouts and people haven’t got their culverts cleaned out and their eavestroughs from all the falling leaves and things like that. It could cause a few problems so beware of it.”

The rain is expected to let up somewhat on Thursday before another heavy pulse of precipitation for the weekend.

“Basically if I look at the icons there for the forecast, it’s showers or rain for the next entire week. This is really fall-like weather, more like we’d see perhaps in November than late September.”

Early next week, we could see more sunshine and summer-like weather as the system moves south to Washington State.