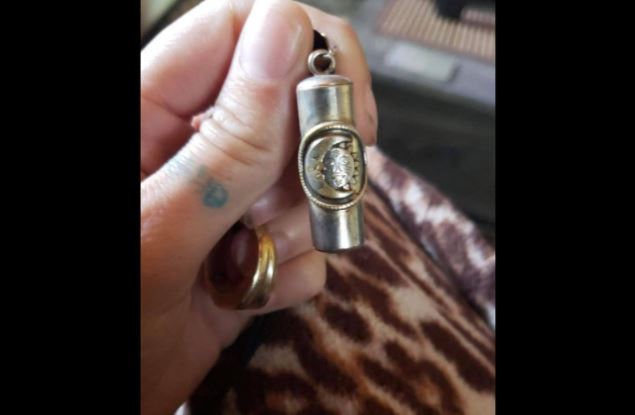 A necklace similar to this one was stolen in Campbell River. It looks like this, but with no moon. (Supplied by Caitlin Lorimer)

They were taken from her boyfriend’s truck parked outside their home near 2nd Avenue and Dogwood Street in Campbell River.

While other things were stolen including lottery tickets, sunglasses, and cash, the most important items were two necklaces that contain the ashes.

One is a silver butterfly on a chain, the other is a black thread-like material, with a silver metal tube-shaped pendant.

Lorimer said when her boyfriend left for work early in the morning this week, he noticed the passenger door was open.

“He realized that it had been burglarized,” she said.

It was more than jewelry that was stolen, Lorimer said: “It’s pretty upsetting when that’s the last thing you have left of someone and someone takes that from you. They’re clearly not of any value but it’s just been really difficult just trying to get the word out there and hoping that someone will find it in their hearts to return them.”

She said they have sentimental value that can’t be replaced.

“I just want my items back.”

They had just moved and Lorimer said she didn’t feel comfortable leaving the necklaces in a box, so he put them in the centre console of the truck.

“I honestly just totally forgot to pull them out,” Lorimer said. “It was totally by accident.”

Lorimer said she’s “not shocked at all” by the theft.

“I just recently moved to the Iisland from Alberta, I was there for 10 years, and I’ve been seeing, every day, posts of break-ins around Campbell River. The crime rate seems to be extremely high right now.”

Her best friend died in a motorcycle accident on his grad night while her dad died instantly of a heart attack.

They died on the same day, 10 years apart.

Lorimer said beside his mom and his sister, she was the only person to receive her friend’s ashes.

“We spread the rest of his ashes a few years ago on the beach so there’s none left to be had.”

Lorimer is pleading to whoever stole the necklaces to drop them off at or near her front door.

Campbell River RCMP Const. Maury Tyre confirmed that the local police have an open file on the theft.

Tyre added that unfortunately, theft from unlocked vehicles continue to be a major concern in CampbellL River and police are conducting extensive patrols at night to try to prevent these types of occurrences.

“However we cannot simply just stop and detain people for walking late at night, and they can be in and out of a driveway and an open vehicle in seconds,” Tyre said.

“We have made several arrests in recent weeks regarding thefts from vehicles, but due to the fact that the crime is non-violent it is extremely difficult for courts to keep people in custody and they often go out and continue the same kind of activity until they are sentenced.”