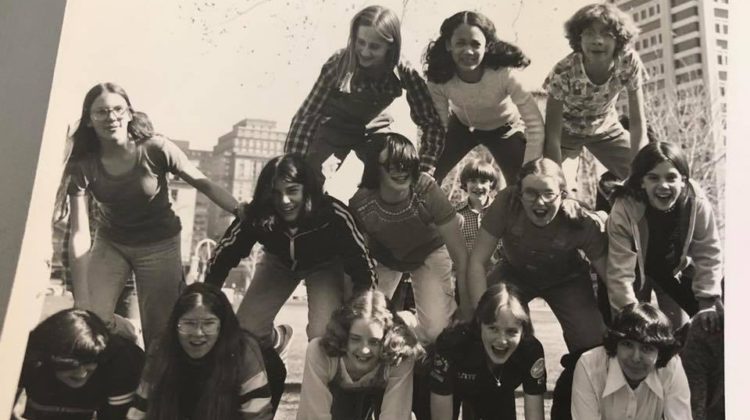 Powell River-Sunshine Coast MLA Nicholas Simons posted this picture of a human pyramid from his school days in Montreal. At the top of the pyramid is U.S. Vice President-elect Kamala Harris. (Nicholas Simons, Facebook)

Their margins of victory were almost identical too, with Simons taking 50.9 percent of the vote in his riding, and Harris declared elected at 50.6 percent.

The 56-year-old Simons talked about his connection to the first female vice president in U.S. history.

“We were in the same school and in the same age group but not in the actual same class,” he said. “It was a fine arts school so we obviously did some performances on the same stage and the same concerts, but I can’t say that I have any memories of interacting with Kamala or her sister Maya who was also in our school.”

Simons says his dad was a former professor at McGill University, where the school is centrally located. He said, FACE, an acronym for Fine Arts Core Elementary, was a place where education was being thought of in different terms.

“People were getting away from the traditional school system and this was the first fine arts elementary school that was set up in the city,” Simons said.

Harris went on to attend Westmount High School which Simons says is “a more traditional school and where my siblings ended up going.”

Simons, who is about to serve a fifth term as the riding’s MLA, believes many Canadians breathed a sigh of relief when President-elect Joe Biden and Harris were voted into power.

“We have very qualified, intelligent, thoughtful people in the White House,” he said. “The fact that Kamala was influenced in part by Canadian school systems and the people in Montreal… it says a lot for her character and I think it shines through.”