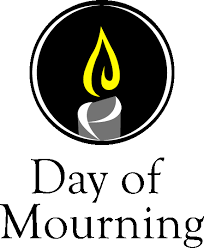 Tuesday marks the The National Day of Mourning, held annually on April 28, it was officially recognized by the federal government in 1991, eight years after the day of remembrance was launched by the Canadian Labour Congress.

The Day of Mourning is now embraced by about 80 countries around the world and has been adopted by the AFL-CIO, and the International Confederation of Free Trade.

Rick Wangler speaks for the Steelworkers Union on the coast, representing woodworkers, and says logging is one of the most dangerous occupations in the country.

Wangler plans to attend the Campbell River Day of Mourning tomorrow, other ceremonies will also be held in Courtenay.

Federal Government officials say the numbers tell the story. In 2013, 902 workplace deaths were recorded in Canada and while thats the lowest total since 2000 when 882 fatalities were recorded, this number still represents 2.47 deaths every single day.