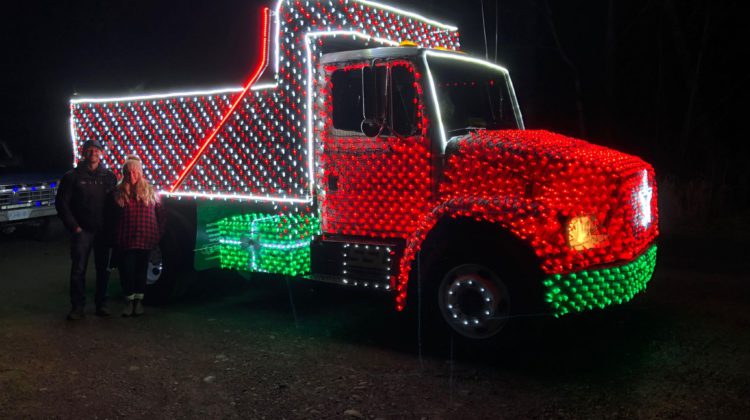 A local couple is fundraising for the Comox Valley Food Bank in the most Canadian of ways.

Each year, Kevin and Erin Kaetler bedazzle one of their Strate Scapes Landscaping dump trucks with Christmas lights, and then cruise through neighbourhoods from Cumberland to Saratoga Beach, and everywhere in between.

Erin explains how this year, they’re supporting the food bank while keeping everyone safe from COVID-19.

“We really don’t have to come into contact with people at all, so we decided to put the donation box at the end of a hockey stick that we put out our passenger side window, so people can keep their distance from us. We’re collecting cash donations.”

The Christmas Lights Trucks e-transfer that they’ve set up has also been a popular choice.

For example, one person who no longer lives in the valley said she remembers the trucks and wanted to send money via e-transfer.

Kaetler said they sacrifice their time and efforts for the sheer joy of helping others.

“Full hearts… it’s become such a thing now that people know the truck, they know the excitement. It’s really contagious when we start doing it. We just want to go out every night because seeing the look on the kids’ faces and the look on elderly people’s faces… people hear the honking and they open the blinds and start jumping up and down. It’s incredible the amount of joy it brings to other people and that brings joy to us.”

“The generosity of people in this valley has been incredible,” Kaetler said.

They don’t plan on going out every night, it depends on their schedule and the weather.

To find out when they’re heading out and to what neighbourhoods, link to their Facebook page here.

This year’s charity drive is an emotional one for the family.

They’re dedicating it to Kevin’s sister, Kathy, who passed away last November from cancer.

“She loved the truck and never got to see it in person, so we didn’t do our truck last year. That was the first time in seven years that we haven’t done it just because of the timing,” Kaetler explained.

“So we decided to dedicate the truck this year in her memory and in her honour and to everybody out there who is currently battling against cancer or who has in the past. So we’ve got a sign on our truck below the driver’s side door with a picture of my husband’s sister and a little dedication.”

Their charity efforts date back to 2013, when they pulled their truck up to care homes to share Christmas spirit with the residents.

They didn’t stop there, driving the truck through neighbourhoods for all to see.

Initially, it wasn’t to raise any money but just to make the season brighter for others.

In 2016 they teamed with Pilon Trucks and made a Facebook page to collect donations for the food bank.

“People kept asking us if they could donate money to help with fuel and those kinds of things, so we said we won’t take anything for ourselves but let’s try and raise money to go towards a good charity and so we decided the food bank would be easy,” Kaetler said.

“It’s just kind of gone from there. More and more people have heard about us and joined our page.”