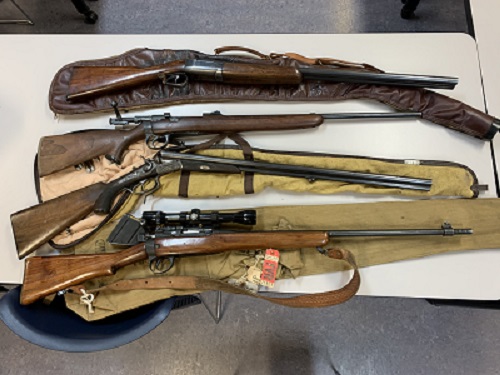 It was a busy month for Campbell River RCMP officers.

Police say they had their hands full with two different gun-related calls throughout December.

One of those included the seizure of four weapons and a large stash of ammunition.

On December 5th, at approximately 6:30 pm, police received a report that someone was pointing a gun at other people in the community near 16th ave and Dogwood Street.

The RCMP says the suspect was stopped for a traffic stop and a fully loaded semi-automatic .22 calibre pistol that had been reported stolen earlier in the year was found, along with a small amount of fentanyl and cocaine.

As a result of the stop, police say a 35-year-old Campbell River woman is facing multiple firearms offences.

Later in the month, officers responded to another firearms-related call.

This one took place on December 12th, at 1:30 pm. Police say they responded to a report of a man with a gun in the 2100 block of Dalton Road.

A 37-year-old male was apprehended and four guns, along with a large stash of ammunition were seized by police.

The RCMP says the man also had other pieces of property that were believed to be stolen on his person.

He is facing charges of Possession of Stolen Property, Possession of a weapon for a dangerous purpose, and Careless Use of a Firearm.

The Campbell River RCMP said from January 2020 to December 20th,2020, officers responded to a total of 16,495 calls. That’s around a two per cent increase from the previous year, where police responded to 16,217.