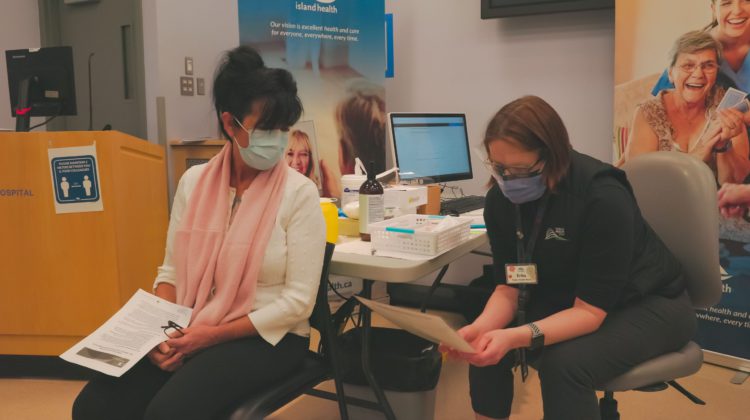 The first Vancouver Islanders got their Covid-19 vaccinations Tuesday.

Island Health was in Victoria to distribute the vaccine to frontline healthcare workers and long term care homes and workers, as well as B.C’s Provincial Health Officer and other members of the government.

He said 1,950 doses came in late yesterday and will be given out first to long term care workers working in the ‘most vulnerable areas, which meant starting in Victoria.

“I asked them which are the most vulnerable homes, and that was the older ones, the ones may have had four-bed rooms, the ones that may have experienced problems with outbreaks in the past.

“On the basis of that prioritization, Victoria was chosen and that also made the list of the care homes to which the invitation letters were sent to staff.”

He added that teams are looking at adding other vaccination sites on the island in the near future and although he couldn’t give the specific locations, he said they would be coming to the ‘northern and central parts of the island.’

Dr. Richard Stanwick also explained that while these first few doses are here now, they are hoping to get even more within the first few weeks of the new year.

“Our intention in early January in terms of the population on the island, even though Victoria got prioritized on the basis of having the highest-risk facilities, is to make sure that we share this vaccine equitably across the island.”

Dr. Stanwick also said that we head into the holiday season, he is stressing the importance of staying in our bubbles and not letting COVID-19 spread as we head into the new year, even if the vaccine is here.

“I’ll be candid, I’m really worried what January is going to look like. If people let their guard down over the holiday season and socialize as they did with Halloween, we will see a spike.”