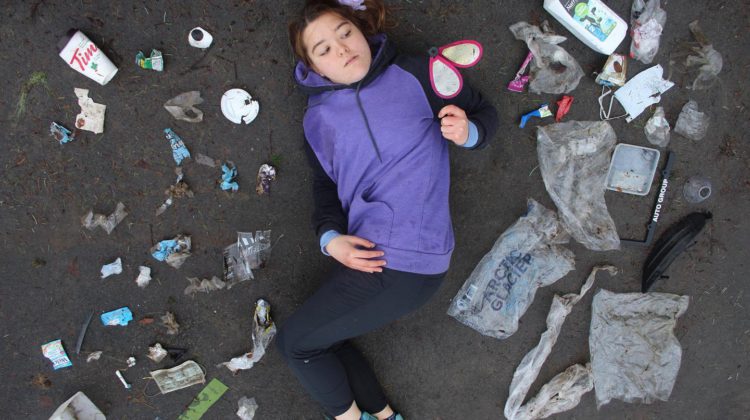 Lucy Dabbs posed among some of the plastic she picked up on Denman Island on Christmas morning. (Lucy Dabbs, Facebook)

An eco-conscious teen is shocked at the amount of plastic she came across along a busy stretch of road on Denman Island.

During her run on Christmas morning, Lucy Dabbs says she found herself picking up plastic and trash on the side of Lacon Road.

A whole lot of plastic and trash, in fact.

“It (is) a very short, four-kilometre stretch of road and just from one side I collected 447 pieces of plastic litter, and when I first started picking it up, I never expected to pick up so much,” she explained. “So it was really shocking to me, especially when I counted it all up.”

Picking up other people’s litter wasn’t something she set off to do that morning.

“I was just running along the road and I saw one piece and then once I stopped I kept seeing more, so I just kept picking it up,” Dabbs said.

Most of it included food wrappers and plastic bags over the two hours she spent there, and she also collected a couple of disposable surgical masks.

Dabbs says it demonstrates to her that even a small piece of plastic really adds up and becomes very significant in the environment.

She doesn’t believe that most of the trash was intentionally thrown onto the side of the road.

Going forward, Dabbs said she has been bringing a bag with her on her morning run and a second time around picked up even more plastic along that same stretch of road.

“It does feel like it really makes a difference,” Dabbs said. “I think that I’ll  be picking up the plastic a lot more often, now.”

She believes that since the pandemic started, people have been more hesitant to pick up things that aren’t theirs, especially trash because it’s perceived as dirty.