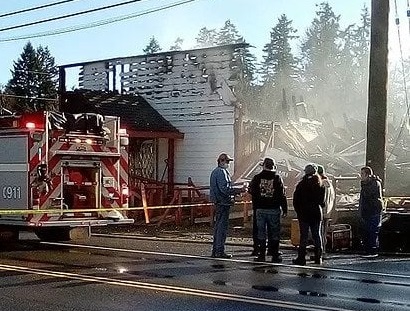 A historical society is looking to the past, after a nearly century-old building in a popular destination on Vancouver Island burned down.

Built in 1921 as the Coombs Community Hall, the Nanaimo Historical Society (NHS) says the building was the heart of the village until the mid-1900s.

Before it was sold in an effort to help finance the new Coombs Hall at the village’s rodeo grounds, it was a hotspot for local community events and celebrations. In recent years, it housed a cannabis shop.

The massive early-morning blaze was first reported to the Coombs-Hilliers Volunteer Fire Department on Sunday, Jan. 3rd just before 2:00 am.

As the fire kept raging on, Coombs-Hilliers Fire needed some mutual aid. A total of eight fire departments helped put out the fire, with water tenders, a ladder truck, command units, and fire engines also on scene.

“Firefighters from multiple fire departments worked tirelessly throughout the night to extinguish the flames, and protect nearby structures,” Coombs-Hilliers Fire says.

Although no other buildings in the vicinity were damaged, and no injuries were reported, it adds that the former hall is no longer.

News of the fire sparked a flood of memories for NHS member and historian Sharon Cox-Gustavson. She recalls her parents as hall board members in the ‘40s and ‘50s, and says locals gathered at the hall for everything from Halloween to Christmas, concerts, wedding receptions, and luncheons.

According to Cox-Gustavson, the hall also hosted movie nights before the Qualicum Village Movie Theatre was built in downtown Qualicum Beach.

“I remember it always being an old black-and-white western, and with the old projector there always seemed to be an excess of intermissions while the projectionist remedied things,” she says.

While its walls may no longer be standing, Cox-Gustavson and others with similar experiences can rest assured that memories last a lifetime.