Capsized barge in Port McNeill will stay underwater until February 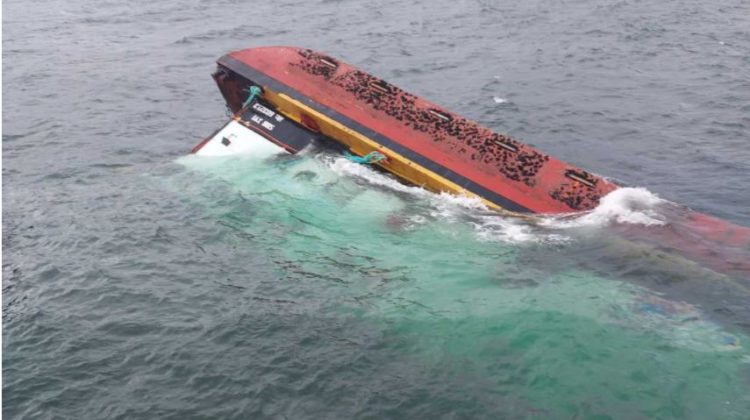 It will be a while before a capsized barge is pulled out of the depths of Port McNeill marina.

The marina’s interim harbour manager, Rebecca Adams, says weather played a role. “This all happened due to an adverse wind event. So they were tied up to our Ministry of Transportation dock, and basically the storm got too bad and the barge ended up tipping too far over to one side, when one of the pilings that they were to actually broke and that’s what caused them to capsize.”

The barge is still submerged by the ferry dock but no further major pollution releases are anticipated at this time.

Adams says that means it will now stay underwater until next month. “Their prediction, based on weather and equipment availability will be early to mid-February to try to do another lift of the barge. We do have WCMRC (Western Canada Marine Response Corporation) on site. They and the Canadian Coast Guard are doing daily checks to ensure there are no pollutants that are coming up.”

Attempts to recover the barge have been temporarily suspended until weather permits and recovery equipment becomes available.

The province says it’s moved from the emergency phase into the recovery phase and that the situation continues to be monitored by members of Unified Command (UC).

It was one of two vessels docked together.

The barge took on water and sank at the dock, while a 50-foot steel barge broke away from its moorings and collided with a constructed barrier roughly 100 metres away.

At this time, the incident is moving from the emergency phase into the recovery phase.

Plans to collect remaining debris, sample the affected area and conduct shoreline assessments are being revised and developed. The situation continues to be monitored by members of Unified Command (UC).

A Notice to Mariners will be issued to caution vessel traffic of the incident.

Back on Jan. 8th, the barge was actually raised to the surface.

But during the re-floating process diesel from the barge was released.

While the release was initially contained inside the boomed area, the barge ended up lost stability and capsized again.

Adams says this damaged the containment boom and allowed diesel to escape.

“Some of the oil spill that came out during the lift escaped but that has since been resolved,” Adams said.

A further 60 metres of boom was deployed to contain the spill, but high winds and waves have made it difficult to estimate the amount of diesel that may have escaped the boom area.