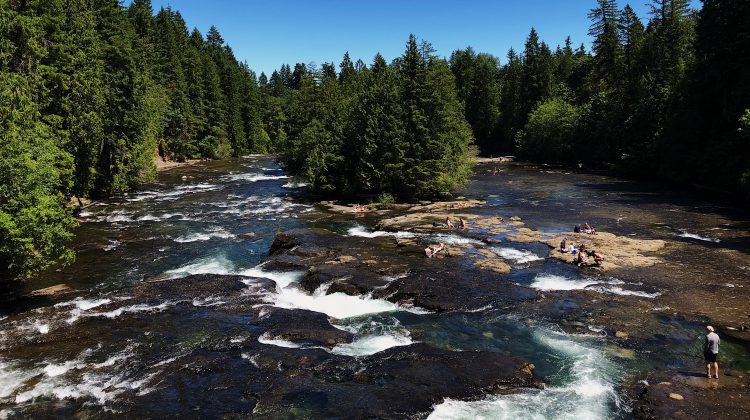 While development is off the table for the property around Stotan Falls, there’s a chance it could one day be open again to the public.

After 14 unsuccessful years, 3L developments has decided it will not pursue another rezoning application for the land.

The company said in a press release Tuesday, that it “will not be involved in any further application for rezoning and subdivision.”

“The discussions between the regional district and the property owner in terms of establishing a park are in the very early stages and are just beginning,” Dyson said. “The property owner has previously presented development proposals which included the concept of park dedication. Those were ongoing over a number of years.”

At  this point, Dyson couldn’t share much about how these talks are progressing: “I appreciate that the community wants to know but it is the really early stages at this time, but we hope to keep the community informed if this continues.”

The popular summer destination for swimmers, sun tanners and adventurers was closed off with barricades and had 3L employees stationed at the gates last year, sparking uproar from the community, who would like to see the land turned into a park or public land.

Dyson said that the CVRD is very aware of the value of Stotan Falls and the interest that there is in the community.

3L first started the process in 2006, with hopes to build a subdivision within the 500 acres of land near the Duncan Bay Main bridge crossing the Puntledge River and along parts of the river’s course, which is also home to Stotan Falls, a popular swimming area in the Comox Valley.

In November of 2020, the Comox Valley Regional District declined the application to rezone the land in exchange for the parkland.

In the press release, 3L says they are “aware of a group of Comox Valley residents who are trying to save this land for park purposes. We applaud these residents and wish them success in their efforts to have the property annexed into the City of Courtenay and developed in accordance with the Regional District’s Regional Growth Strategy; however, 3L will not be involved in any further application for rezoning and subdivision.”

The company says it hopes that the Comox Valley Regional District, City of Courtenay or other public or private party is willing and able to find a way to purchase the property so the public can have its park and access to the falls, but in the meantime, since the property and riverbed is privately owned by 3L, public access cannot be allowed.