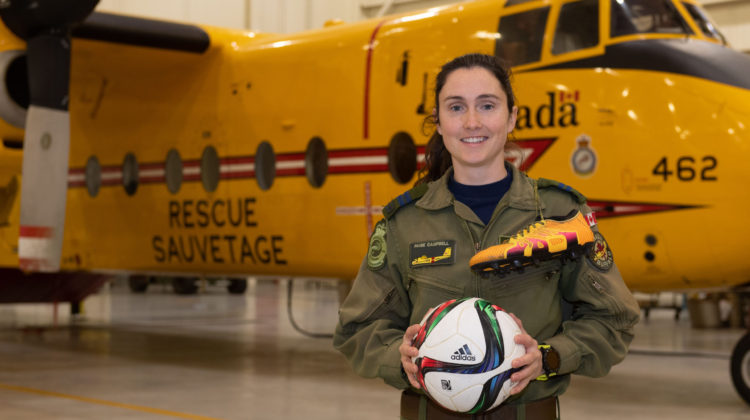 A Vancouver Island air force captain has been named the RCAF female athlete of the year.

Captain Paige Campbell, who is the Air Combat Systems Officer with 442 Transport and Rescue Squadron at 19 Wing Comox received the award.

Campbell says in her role with the Canadian Forces she strives “to always be learning, having an open mind and a positive attitude.” She believes this mindset “will take you further than you know. You never know if you will enjoy or excel at something until you try it.”

Captain Campbell brings this same point of view to her athletic pursuits as well as her work with the RCAF.

She is a two-sport athlete who won two national gold medals in 2019 as captain of the 19 Wing Women’s Volleyball Team, and as a member of the Canada West Women’s Soccer Team.

The RCAF says when she was posted back to 19 Wing in 2019, she rejoined the women’s volleyball team. She served as the setter when they won the CAF women’s national volleyball championship. The pennant for that win is proudly displayed in the trophy case at 19 Wing Comox alongside the tournament’s coveted trophy.

The Forces explain that Capt Campbell was awarded the RCAF Female Athlete of the Year to recognize both her commitment to and success in Canadian Armed Forces sports, as well as her participation and contribution to several civilian sports organizations.

Being a part of sports in the CAF is important to Captain Campbell, and she says “It is great to reconnect with old friends and to compete at a high level.”