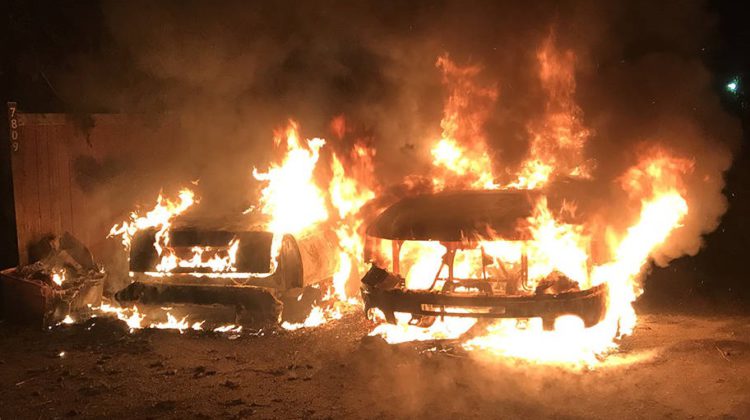 Police in the Comox Valley are now investigating, after a so-called suspicious fire destroyed a truck and a car parked in a Black Creek driveway.

At around 5:30 am yesterday (Jan. 20th), Oyster River fire chief Bruce Green says crews were dispatched to a property in the 7900 block of the South Island Highway, near Endall Road.

“One route, we were told that fire had spread to a couple vehicles,” Green says. “When I arrived on scene, there were two vehicles that were heavily involved in fire.”

According to Green, there are no injuries to report. He says while the residents were home at the time of the blaze, they were asleep.

“We had 15 firefighters respond to the scene, and it took them probably no more than 15 minutes to extinguish the fire. We stayed on scene for another half-hour/hour after that to do traffic control.”

As a result of the fire, Green says that the engine of the truck was completely destroyed, while the back-end of the car saw extensive damage.

And, following an investigation, Green adds that the fire is believed to be “suspicious in nature.” We’ve reached out to the Comox Valley RCMP for comment.

This isn’t the first fire Vancouver Islanders have seen in recent weeks. Just last week, two schools in the Cowichan Valley caught fire. The man suspected of being responsible is now facing charges.

Meanwhile, over in Port Hardy, police are still investigating an apartment fire that left several injured and 24 people without a home this past Sunday.