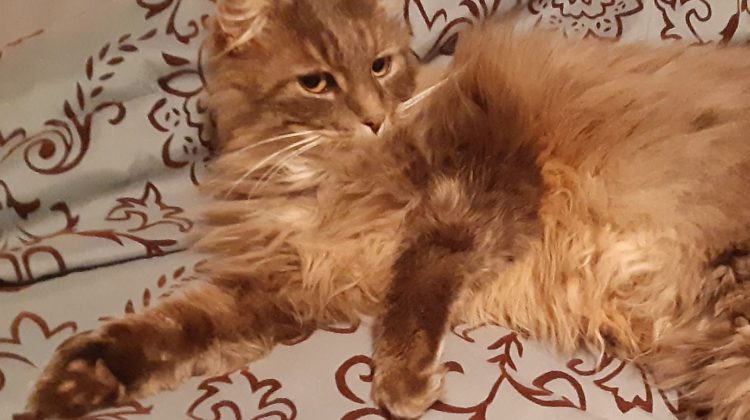 One July day in 2017, a feline pushed through a cat door and went for a summer adventure in Campbell River.

Technically, he was brought back to his owner Cindy Buckler, after SPCA staff spotted his identification tattoo.

“When I got the phone call I was so emotionally in shock, I was crying, I didn’t know what to think, I thought, ‘Is this a joke,’ kind of thing,” Buckler said. “When they (the SPCA) they called me right away after they looked over him and gave him some shots and cut off some of the matted hair that was all clumped together and stuff.”

Buckler was told that a resident of Forest Glen Mobile Home Park had seen Spaz hanging around her place for a couple of months.

“So she was feeding him, but he wouldn’t let her get too close and every time she tried to see if he had a tattoo or something, I guess he would get snippy with her,” Buckler related.

She ended up calling the SPCA, and officers managed to corral Spaz and bring him to the shelter.

Spaz became part of Buckler’s household in December 2011, and a few years later, after they moved to their new home on Read Place, he went missing.

“There was no sign of him. I called all the SPCAs, I called animal control, I called Comox, I looked everywhere for him. I actually made up tons of flyers and I posted them all across town.”

What happened to Spaz, and what he’s been doing for the last four years, remains a mystery.

“We have no clue,” Buckler said. “We don’t know if he was taken and dropped off because that was actually the year that quite a few cats were going missing, around that time. A neighbour cat actually went missing at that same time as well.”

Buckler said Spaz is an indoor/outdoor cat that always stayed close to home: “I don’t think anybody would have actually been able to get him, to steal him or something but truly we do not know what happened.”

Today, Spaz is reunited with two other pets – one cat, and one dog – who were part of the family when he went missing, and they actually have added three more cats to the household.

CR PAWS is a lost and found animals of Campbell River Facebook group that Buckler monitored “religiously” with the hope of finding Spaz. He had apparently popped up on the page a couple of months ago and she missed the post.

Buckler said they never gave up hope that Spaz was out there, somewhere.

“At the same time we were completely shocked,” Buckler said. “It’s like a miracle.”

He’s been home for a few days now and Buckler said it’s a process getting him acclimatized to his new/old surroundings.

“It’s not 100 percent back to normal,” Buckler said. “We do have a few other pets, too, that he is not familiar with. He lets me go up to him and he lets me pick him up but he does a little unsure growl. My fiancee (Chris), he won’t pick up Spaz right now. The big thing is getting him familiar with everything in the house. Within two days he definitely has come a long way.”

He does know where the kitty door is.

Buckler says it’s locked for the time being.