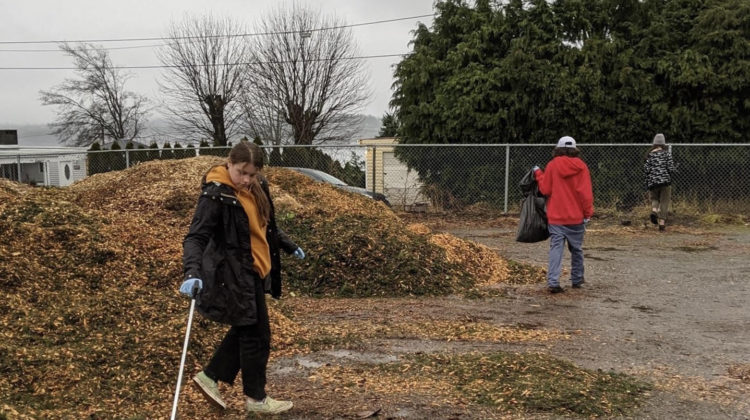 It’s gold stars all around for students at Phoenix Middle School in Campbell River.

They’re stepping up, taking charge, and taking out the trash, after venturing out of the classroom last month to pick up garbage that lined the streets in the nearby vicinity.

From cigarette butts to fast-food containers to disposable masks, Miss Parker says her grade 8 students worked hard to restore the area to its natural beauty.

According to Parker, all 20 of her students took part over a total of three hours in February. However, the recent snowstorm kept them from going out once a week.

When it came to getting the job done, student Charlie says she and her classmates used gloves and picker-uppers so they didn’t actually have to touch the garbage.

“I think it creates a healthy environment,” Charlie says. “No one really wants to work in a dirty area, and sometimes there can be hazardous things. It just overall looks nicer too.”

Students teamed up in groups of three, with two picking up the garbage, and one holding the garbage bag. COVID protocols were top of mind, and all students had their face-masks on as soon as they stepped out of the classroom.

Findings were then put into big garbage bins outside the school, with Parker adding she spoke with janitorial staff to make sure the bins were being emptied out the same day, “so that it didn’t start overflowing.”

Because Parker says her students “really enjoyed it,” she’s hoping to take them out for another clean-up in the near future.

“It’s a little challenging with our limitations this year to think about how we can involve ourselves in the community right now. We’re currently doing a little art project that I’m hoping to display downtown, just as something to kind of bring some joy and happiness,” she says.

“But we’ll definitely do another clean-up for sure.”

Parker’s now congratulating her class on a job well done, while also reflecting on her “really awesome group of students” who she says are all “really helpful.”

“I’ve got a lot of leaders in my classroom, and I love seeing that in them. Hopefully moving forward, we’ll have more opportunities like this.”

But it doesn’t stop there; Parker’s now hoping her students have somewhat set an example for other classrooms around town and beyond, to step outdoors and help clean the streets in their surrounding areas as well.

“It would be cool to see some other classes get out there. Even if we look around our spaces now, the streets that we walk down are already dirty again,” Parker adds.