Valley students continue their excellence in robotics during virtual tournament 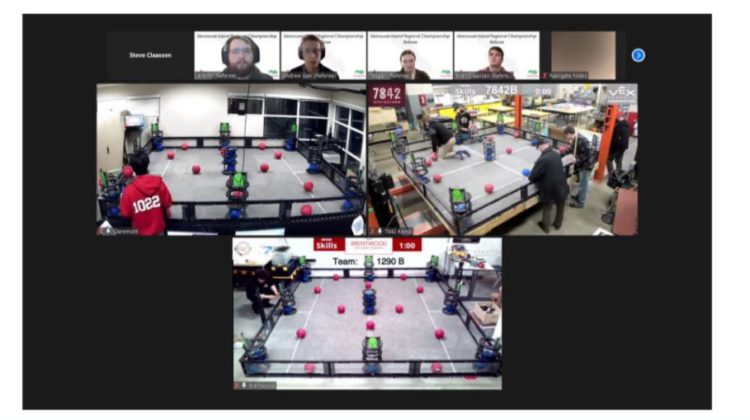 Comox Valley students are continuing a tradition of excellence in robotics.

Among the 20 island teams taking part, the 7842 NIDES teams won three of the four spots for the worlds.

Along the way, they captured the top three spots in the Robot Skills Challenge, as well as four additional judged awards.

Both teams will also advance to the world competition.

Team 7842B members Theo Lemay and Sawyer McClellan  (Vanier) won the Excellence Award trophy and scored the highest points of the tournament (227 out of 252), placing them second overall in B.C. and 7th Canada-wide, which earned them a berth to the worlds.

“It was a uniquely held event this year. The students and coaches stayed in their respective home schools and competed remotely,” explained Steve Claassen, Career Coordinators and tournament organizer and host.

“The Comox Valley continues to produce brilliant engineering & robotics students that are very competitive on the national and world stage.”

Claassen attributes the success of these students to the teachers offering specialty programs such as the ENTER program (NIDES), Physics and Engineering, Electronics/Robotics, Creative Collective, and Makerspaces in the schools along with dedicated parents that support their children’s education.

NIDES 7842 coach Kemp Currie credits the coordinators, coaches and volunteers who have made this memorably unique season such a huge success.

“It’s gratifying to have so many 7842 alumni returning post-grad to assist and mentor those who now follow in their footsteps, in particular, Jeremy Lyster, Andrew Gair, Teagan Parkin and Evan Claassen, who sacrificed their days off to remotely referee for us at this and our previous  weekend tournaments,” said Currie.

“Thanks also goes to Dr. Stewart Savard and Nicolas Parlee who remotely judged the awards as well as Nick Ward, our head Ref this season.

In non-COVID times, VEX World’s are held in Louisville, Kentucky, in April.

This year, the tournament takes place virtually May 17th to 22nd via Zoom.