RCMP looking for suspect after second assault in Courtenay 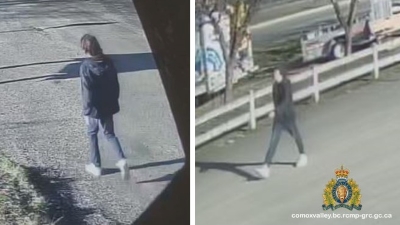 Photo of the suspect provided by Comox Valley RCMP.

The Comox Valley RCMP is looking for witnesses after a second hammer attack in less than a week.

Police say the most recent victim told officers he was walking in an alley behind the Canada Post office on Ryan Road in Courtenay at approximately 1:10 pm when he was attacked.

The man told police he nodded at the suspect who then struck him with a small hammer.  The victim suffered minor injuries to his face and leg.

This is the second time a person has been attacked with a hammer in the Comox Valley over the last week. The first incident happened on March 16th when a man was attacked while walking along the Rotary Trail near 11th Street and Cumberland Avenue.

They are asking anyone who was near the post office on Ryan Road between 12:30 pm and 1:45 pm on Saturday to review their dashcam or surveillance footage and call police right away with any information.

Police have also released an image of the suspect and he is described as being clean-shaven in his mid-twenties, slim build, and over 6 feet tall with brown shoulder-length hair.  He was wearing dark-coloured pants and a dark-coloured jacket.