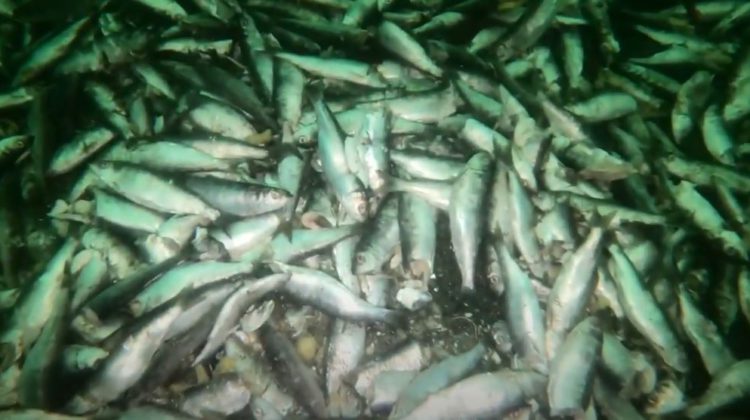 Conservancy Hornby Island (CHI) is sounding the alarm after someone dumped a herring catch on the ocean floor in Deep Bay.

On March 19th, CHI members Rebecca Benjamin-Carrey and Dagen Mutter responded to an anonymous tip off that, the group says, “a commercial fishing vessel had dumped its load of herring after the packing vessel refused the catch.”

CHI says the “findings were shocking to say the least. GoPro footage reveals what could be an entire boatload of dead herring covering the sea floor beside the government dock in Deep Bay.”

“Herring will spawn up to eight times so it’s sad that the fish were dumped. Possibly the fish were either spawned out or they were too young and the roe not large enough for the market. It is wasteful to the marine environment and the fishing industry itself,” said CHI chair, Grant Scott.

Locky Maclean, herring advocate with CHI, said, “if Canadians needed further convincing that this is a totally wasteful and unsustainable fishery, this illegal dump right inside Deep Bay Harbour speaks for itself, it seems the catch was no longer of any commercial value to the roe fishery.”

Maclean called it a “total disregard for a keystone species in the Salish Sea that is a main food source for Chinook salmon, orcas, humpbacks, and countless seabirds and marine life on our coast is further evidence that it needs to be shut down.”

The investigator in the video is Rebecca Benjamin Carey, a CHI herring campaigner, videographer and Hornby Island resident.

Meanwhile, conservation groups are calling for a moratorium on the fisheries to, they say, allow the herring to rebound.

With regards to the incident, Fisheries and Oceans Canada released the following statement:

Fisheries and Oceans Canada (DFO) is committed to managing Pacific herring fisheries to ensure that there are enough herring to spawn and sustain the stock into the future and support the species’ role in the ecosystem.


The Department is aware of an alleged dumping incident that occurred on March 19, 2021, in Deep Bay, B.C.

DFO’s Conservation & Protection fishery officers are currently investigating this incident. Subsection 34 (2) of the Fisheries (General) Regulations prohibits commercial fishers from dumping any catch that has been caught in accordance with the Fisheries Act from their vessel.

As the investigation is ongoing, we do not have any specific details to share at this time.

As part of DFO’s work to end illegal activity, the Department asks the public for information on any contravention of the Fisheries Act and regulations. Anyone with information can call the toll-free violation reporting line at 1-800-465-4336, or email the details to DFO.ORR-ONS.MPO@dfo-mpo.gc.ca.