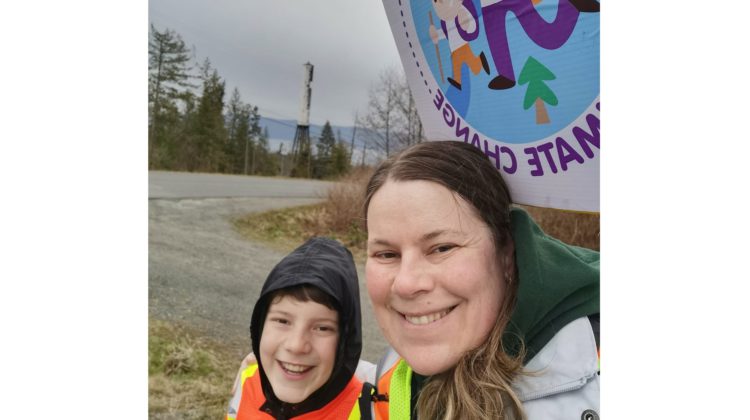 They’re back from the trek of a lifetime, and raised thousands along the way.

For Megan Kelso and her 10-year-old son Cody, walking 115 kilometres across the Sunshine Coast came with its challenges, but it was well worth the effort.

Just in time for spring break, the duo set off on a four-day journey from Gibsons to Powell River on March 14th. And it was all in the name of the environment and animals.

Their goal was to not only raise $20,000 for a new solar roof for the Sunshine Coast SPCA, but another $10,000 for the British Columbia Sustainable Energy Association’s (BCSEA) “Cool It” program for kids.

While they completed the walk safely and soundly, Kelso says they definitely faced some discomforts along the way like fatigue and blisters.

However, she explains they were able to keep each other’s spirits up: “Cody took it all in stride and he was just super cheerful and proceeded to laugh at me when he could,” Kelso says.

She’s also beaming when thinking back to the support both received from communities as they passed through, which she explains as “truly spectacular.” In fact, Kelso notes it’s one of the things that kept them going.

“We had many horns honking for us along the route,” she says. “We had people who came down their driveway to greet us along the way, and people at the SPCA to greet us there when we made it to our final destination.”

The last day was the toughest with both of them in some degree of pain, however, Kelso says the pain paid off in the end since it “brought with it the knowledge of completing what we set out to do.”

Kelso’s happy to share they’ve reached their $10,000 fundraising goal for the BCSEA.

“We found out from them that those funds are actually going to be used specifically to bring the ‘Cool It’ program to the schools over here on the Sunshine Coast, which is phenomenal,” she says. “That was totally unexpected.”

However, the mom and son team is a bit shy from reaching their $20,000 goal for the BC SPCA. So far, they’ve raised just over $17,800. “We’re still working hard to raise awareness to reach our goal,” adds Kelso. “We appreciate every donation we’ve received so far.”

To learn more about Kelso and Cody’s walk, including videos and photos, and to donate, visit their website: https://climbforcc.org