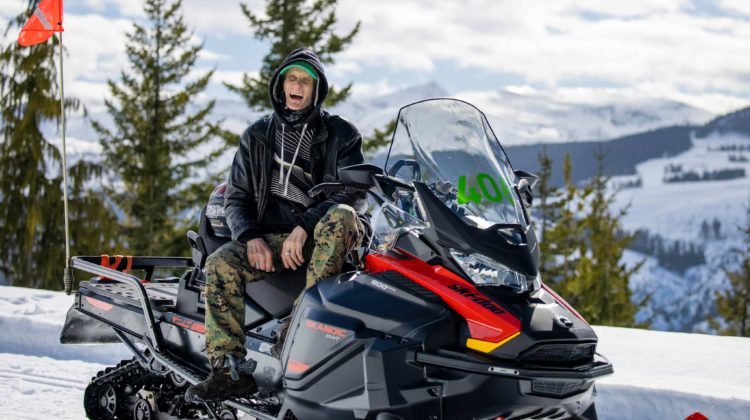 It’s a wish come true for a Campbell River man.

Sixty-eight-year-old Guy Banks has terminal cancer and asked the North Island Snowmobile Association if someone would take him out for a ride before he passes.

Local snowmobile enthusiast Allan Sawchuck knew the local trails were quite rough by the end of the season, so he contacted Mount Washington to see if they would allow them on the cross-country trails after hours.

Sawchuck said Mount Washington not only made it happen, they even supplied a touring snowmobile.

“It made it more comfortable for him (Banks) because our trails were getting pretty beat up and to double somebody is pretty rough, and (with Banks being) an elderly age I thought I would contact them,” Sawchuck said. “I figured the answer might be no but it was actually yes, and we had a great time on nice, smooth trails.”

With Banks on the back of the snowmobile, the two, who had never met before, navigated the snowy terrain on a partly sunny day last Friday.

Sawchuck said it was an emotional and unforgettable experience – for both of them.

“He definitely likes the outdoors,” Sawchuck said. “Even though he’s lived on the island for 20 years, he just saw the vastness and the height and how steep some of the terrain can be that we were able to go on and that’s what attracts me, you know, getting out into the wilderness. We can get to areas that nobody’s probably even set foot before.”

Sawchuck said the smile Banks had on his face all day “made my day and was thankful I was able to share the activity I enjoy most.”

He added that it gave him a new perspective: “It made me feel pretty good, of course, and I’m sure I am going to live my life more, knowing that our life is short, and definitely live life to the fullest.”