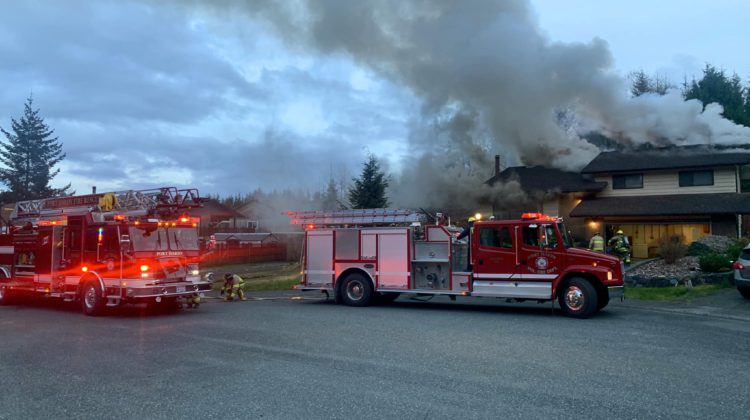 Fire crews on the North Island are being credited for saving a Port Hardy home from going up in flames.

On Thursday (Apr. 1st) at around 7:50 pm, Port Hardy Fire Rescue was called out to the “aggressive fire” on Scott Street. 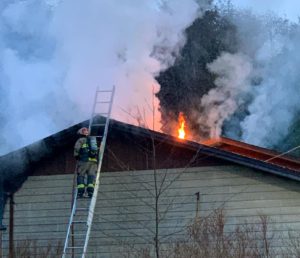 In under two minutes, Chief Brent Borg and Deputy Chief Gavin Texmo were on scene. They arrived to find a “rapidly growing fire” on the backside of the house working its way up into the eaves and attic.

“Engine 10 and Ladder 17 arrived on scene only a minute or two later and quickly mounted an aggressive transitional attack by hitting the fire hard from the exterior then chasing it from the inside,” Port Hardy Fire Rescue explains. “Crews were also sent to the roof to attack from the top-down and into the attic to fully stop the spread.”

Within an hour, Port Hardy Fire says the blaze was under control with damage contained to the main living area.

“Fortunately, the bedrooms and downstairs area with many important belongings were saved and nearly untouched with the exception of some minor water damage.”

A couple and their new puppy were able to escape uninjured. They told fire crews that the blaze started from a BBQ on the back deck.

As we move into grilling season, this is prompting Port Hardy Fire to send out some important reminders: “be sure to always keep your BBQ at least 10-12ft from the house, always have a fire extinguisher within a few steps, and never leave the grill unattended or let it flare-up.”