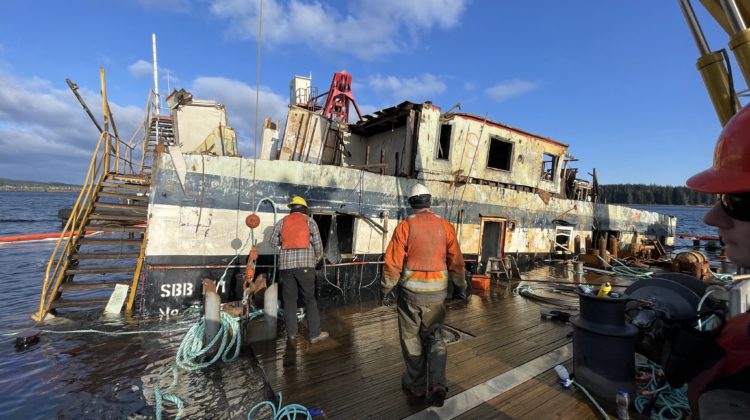 Sitting at 80-feet, the two-story Alaska Plaza has been pulled out of the Port McNeill marina after it first sank on Christmas Eve (Photo: Colmor Marine & Salvage)

That capsized barge on the North Island is no longer.

The 80-foot, two-story accommodation barge named the Alaska Plaza has finally been pulled out of the depths of the Port McNeill marina. 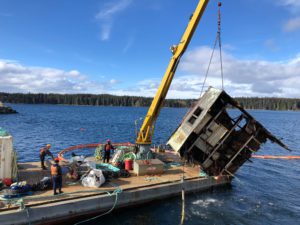 The Comox Valley-based company was called in to do the job, in collaboration with Sea Roamer Marine Services and TCB Marine Consulting.

Colmer Marine took to social media last Tuesday (Mar. 30th) to share the news, and said the wreck “fought us to the bitter end when she arrived at the bulkhead at 1:00 am this morning. Proud of our team and relationships.”

Back on January 8th, it was actually raised to the surface. However, Adams said it lost stability and capsized again. This resulted in damage to the containment boom, allowing diesel to escape.

Now three months later, after what Colmer Marine called a “marathon and massive salvage operation,” the Alaska Plaza has resurfaced for good.

The barge is owned by Orgeon’s Croman Corporation, and reports say the company is taking full responsibility for the cleanup. They also say minimal environmental impact is expected.