‘These people did this maliciously’: Reflecting on video of pair removing red dresses along Island Highway 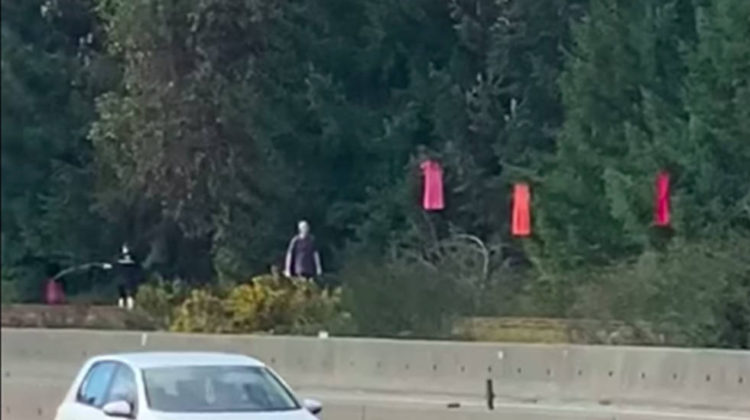 Stephanie Goudie posted the two videos to Facebook on Tuesday, tagged with the caption: “A good friend sent me these videos, hesitant to post or share in case of backlash, yet horrified by what they witnessed.”

As communities across Vancouver Island hang red dresses alongside the highway to commemorate and raise awareness of missing and murdered Indigenous women, Goudie finds their actions to be “heartbreaking and very disturbing.”

Now, months later, she’s at the site in Ladysmith where “red dresses were ripped down and thrown into the bushes.”

“To see them ripped down was disheartening, I was in tears,” Elickus shares. “I couldn’t believe that someone would do something like that.”

She says the dresses weren’t hung on private property, and they weren’t garbage: “If anything was seen on the side of the road and that looked like some kind of memorial, people just don’t go and touch other people’s things. This is to bring awareness and make a statement.”

“If people want to inquire or aren’t aware of what it symbolizes, that’s one thing… you ask. It only takes a Google search to find out what the red dress symbolizes.”

Elickus thinks the pair “did this maliciously.” She says she can’t imagine any adult doing this, and thinks it was fueled by either hate, racism or both.

“You can tell just by their mannerisms and the way they just flung the dresses in the bushes. It’s very disturbing, very disheartening,” she adds. “I’m back down here today. I drove from Campbell River to smudge the area of the negative energy and hang a couple of dresses.”