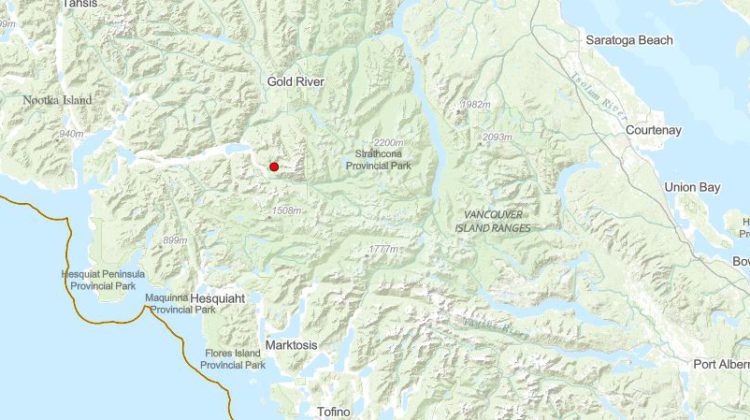 The red dot marks the location of the Watchlee Bay fire on Vancouver Island. (Supplied by the BC Wildfire Dashboard)

The wildfire season is already underway on Vancouver Island, prompting a warning from fire officials.

The biggest one so far is the Matchlee Bay fire southwest of Gold River, which as of this morning had grown to eight hectares.

It’s also the first major wildfire of the year on the North Island.

“We’ve had some smaller ones as well but nothing of this size,” said Coastal Fire Centre information officer Donna MacPherson, who added that the rugged location of the fire is adding to the challenge.

“This fire is in really, really steep terrain,” she explained. “Our crews are having difficulty getting around it just because of the rolling debris that they’re experiencing but today we have considerably more resources on it, we’ve got 25 firefighters and a helicopter working on it. This morning when they got up the fire was mostly smouldering, with a couple pockets of open flame on it, so the fire activity is considerably down.”

This brings the number of wildfires in the Coastal Fire Centre region this year to 17, all of which have been human-caused. The Watchlee Bay fire is under investigation.

With warmer days ahead and summer around the corner, MacPherson says we need to enjoy the outdoors responsibly.

That includes using fire in any way.

“It doesn’t mean dumping some water on it and walking away and leaving it smouldering behind you.”

She added that the Watchlee Bay fire is a prime example of a fire that may be smouldering, but isn’t out by any means.

“All that happens is, as that area dries and it warms, you’ll see more flame open up. (The) same can happen to your campfire. It’ll just start burning exactly the same way that it did before you dumped the water on it.”

Meanwhile, MacPherson said the Watchlee Bay fire happened on an active logging site: “In this particular case, it was in slash. It was an active logging site, they have already felled and logged the timber and there was a fair amount of debris with no roots on the ground, and that’s what caught (fire).”

Cooler and possibly damp weather is in the forecast, as early as Friday, which is good news on the wildfire front.

“The weather is supposed to break down that we’ve been enjoying for the last 10 days to two weeks,” MacPherson said. “We’re supposed to be having a weather event coming in and that will certainly help knock the fire behaviour down even more. It doesn’t necessarily put the fire out but at least it will prevent any movement of it.”