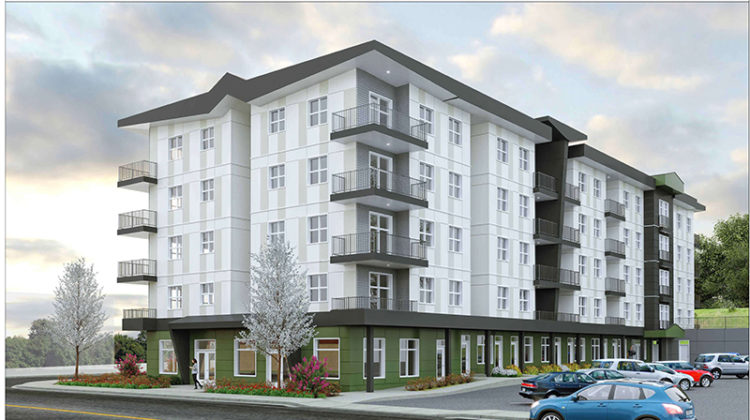 The City of Campbell River has teamed up with the Province of B.C. to build 55 new affordable rental housing units for women and their children.

The proposed apartments – Eagle Harbour – will be located on properties owned by BC Housing close to downtown’s Rose Harbour, including a lot that the city donated to the project at 1180 Fir Street.

According to the city, the mixed-use five-story building will offer larger units for women and children, accessible units for senior women, as well as ground-floor commercial space.

Transition Society executive director Valery Putz says they’ve been supporting women and children in town for 34 years. She notes her team is “very pleased to be able to expand the housing and support services we can offer from emergency shelter, and transitional housing to include more permanent affordable housing options.”

Because Rose Harbour has had a significant waitlist since opening in 2013 – with 60 households on the list last year alone – the city feels Eagle Harbour will help fill the housing gap.

It says BC Housing will provide around $19.7 million in capital costs for the project through the Women’s Transition Housing Fund, plus an annual operating subsidy of approximately $550,000. The city will make significant financial contributions by covering the cost of all city-related development fees and charges.

“Council is very pleased to continue the partnership with the North Island Transition Society that created the vision for Rose Harbour in 2012 and now provides more affordable and diverse housing options in Campbell River. Our strong relationship with BC Housing and community partners is helping to deliver safe, affordable rental housing that’s in high demand,” adds Mayor Andy Adams.

During their Monday (April 26th) meeting, council approved a development permit for the project. Existing buildings on the property will be torn down before construction on the new building starts.