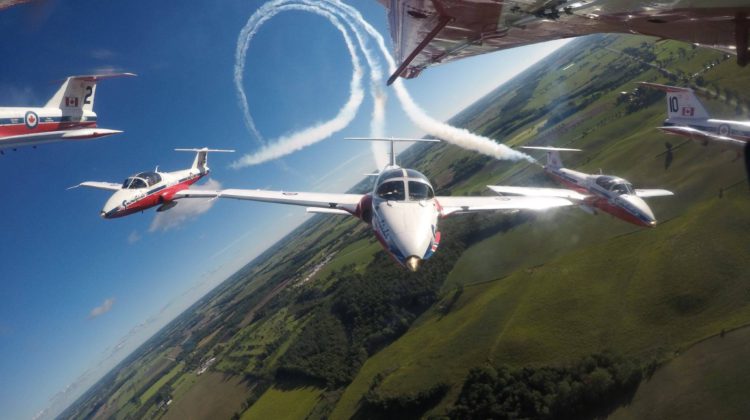 Get ready for the familiar sounds of jet engines in the Comox Valley.

The Canadian Forces Snowbirds are making their return to CFB Comox Tuesday afternoon.

The team will be conducting their annual spring training at the base until May 26th.

Many valley residents are excited to have the planes return, and Public Affairs Officer for the team, Captain Gabriel Ferris says the crew shares the same excitement.

“The team cannot wait to get out of here and start to go on the road. It’s pretty new for me this year because I’m the new PAO. But I see the electricity in the air around the squadron today and yesterday and even last week. People are just excited to go to Comox and they’re all talking to me about how Comox is their second home. How people over there are super caring and warm welcomes and they’re super excited to go back.”

This year because of the pandemic no autograph session will be held and the team is encouraging the public not to gather at places like Air Force Beach or other areas.

Ferris says with the many photo enthusiasts in the valley, he’s sure everyone will be able to get a glimpse of the team from a safe distance.

Ferris also says the last year has been hard on the Snowbirds after the loss of the previous PAO, Officer Captain Jennifer Casey. She was killed in a crash on May 17th, 2020 after the jet she was in hit a bird shortly after takeoff.

He says to honour her, this year’s mission is Casey inspired.

“People didn’t know it but she was a big Star Wars fan, so we’re doing two manoeuvers. One is called Vader and people are going to be able to see them at the airshows,” explained Ferris.

The Canadian Forces Snowbirds are expected to arrive in the Comox Valley Tuesday afternoon.