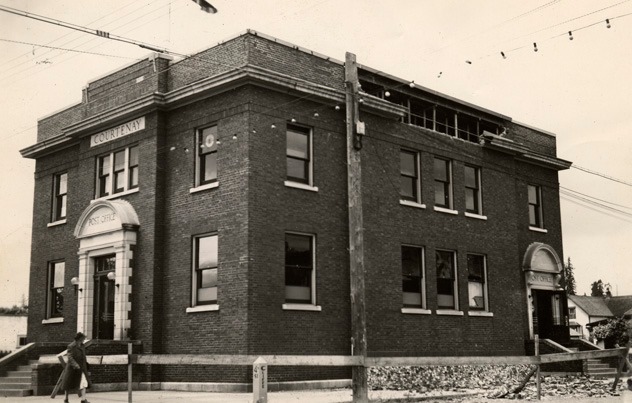 According to the Courtenay Museum, the 1946 quake remains the most impressive tremor to strike the region in historic times, serving as a reminder of how ‘powerful’ and ‘awe-inspiring’ the forces of nature can be.

The 7.3 magnitude quake had an epicenter located in the Forbidden Plateau region, the museum notes, but its tremors rocked the west coast, from Prince Rupert, B.C. all the way to Portland, Oregon.

The shaking demolished around 75 per cent of the chimneys in Cumberland, Courtenay, and Union Bay, and caused damage to buildings in Comox, Port Alberni, and Powell River.

Tall buildings in Vancouver swayed back and forth, and the museum says a number of landslides were recorded too — the ‘most dramatic’ being a rockfall from Mt. Colonel Foster in Strathcona Park.

Back in 1946, it’s recorded that Vancouver Island had a population of around 190,000 people. Luckily, the earthquake happened at 10:15 am on a Sunday morning when schools were empty and streets were quiet.

However, the museum says two deaths were attributed to the quake. But things could have been worse, after a chimney crashed through two floors of the Courtenay Elementary School, demolishing two classrooms where dozens of kids would have been if it were a school day.

Vancouver Island is part of the Cascadian Subduction Zone, the museum adds. It’s a convergent plate boundary that stretches from the North Island to California, and earthquakes are not uncommon here. According to the Canadian National Data Centre for Earthquake Seismology, around 400 earthquakes occur each year, but most are too small to be felt by locals.