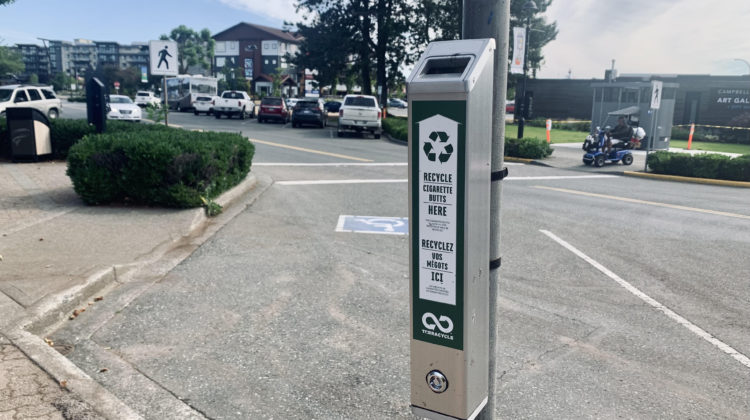 As dry weather persists on Vancouver Island, it’s important to remember the risks of mindlessly tossing your cigarette butt.

With this in mind, Campbell River’s Downtown BIA wants locals to dispose of their butt’s responsibility, launching a unique initiative to help them do just that.

They’ve placed ‘cigarette waste receptacles’ around the downtown core. There are currently ten containers scattered through the area, with plans to add three more.

According to BIA executive director Jan Wade, not properly disposing of cigarette butts leads to increased pollution in our oceans and wastewater. It’s what first prompted the BIA to take action.

Plus, with it being dry outside, tossing your butt on the ground also creates a fire hazard: “Things are so dry right now,” notes Wade, “that it’s critical that people don’t throw their butts.”

She says the receptacles first started going up back in May. However, her team has been collecting cigarette butts since February.

“I heard about a cigarette waste recycling program in Kamloops and Victoria. So I contacted them, and we are now recycling cigarette butts through TerraCycle, which is a company back East.”

Wade says she gathers all the butts up and then ships them to TerraCycle.

“They pay for the shipping,” she explains, “and then the butts, if you can believe it, are recycled from there. The tobacco and the paper are composted, and the filter – which has all the microplastics, which is so harmful to our oceans and water waste – is treated through a program that makes everything into little plastic pellets.”

According to Wade, the pellets are then made into plastic furniture, plastic lumber, and oddly enough, ashtrays.

“So, to date, we have sent off 110 pounds to TerraCycle. And I just picked up another 30 pounds today,” she says.

Wade says it took some time to get the receptacles up and operational. That’s because the BIA had to get donations before arranging for someone to install them.

“They’re two inches square and they’ve got a little flap on them with a snap,” she says. “So when you finish smoking, you can get your butts and put them in there, and then you can always empty them into our receptacles. We hand out lots of those.”

And the receptacles themselves are pretty easy to work, notes Wade. The butts are disposed through the top, and there’s a key for the bottom. You then unlock it, emptying the butts from there.

The BIA’s next task, adds Wade, is to install signs above each receptacle saying ‘Butt Out Here’: “Somebody said that the recyclables are on the small side and not that noticeable, so we decided that we would draw more attention to them.”