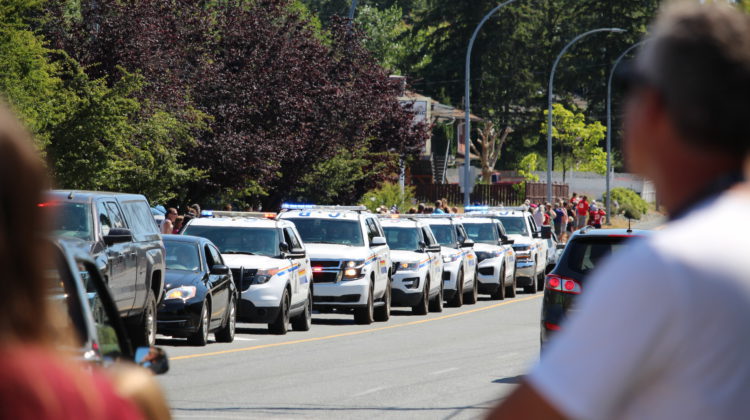 A sense of community is apparent in Campbell River, as locals continue to mourn the loss of a fallen police service dog.

An emergency vehicle procession for service dog Gator drew large crowds yesterday afternoon (Sunday), with many coming out to pay their respects.

Emergency vehicles started their journey at the local RCMP detachment, cruising down Dogwood Street until reaching the Firehall at 13th Avenue.

My Comox Valley Now captured the procession on video.

Seven-year-old Gator was killed in the line of duty last Thursday (July 8th). He was stabbed to death outside the Tim Hortons in Willow Point.

After the incident, constable Maury Tyre thanked everyone for their continued support. His message came after the community formed a memorial for Gator out front of the RCMP detachment. The memorial continues to grow.

“Gator has saved lives, solved crimes, and just lifted the spirits of the officers in our detachment by being present, and [on Thursday] he made the ultimate sacrifice while on duty,” Cst. Tyre noted.

He added that hearts are truly broken, while sending his well-wishes to Gator’s handler and his handler’s family.