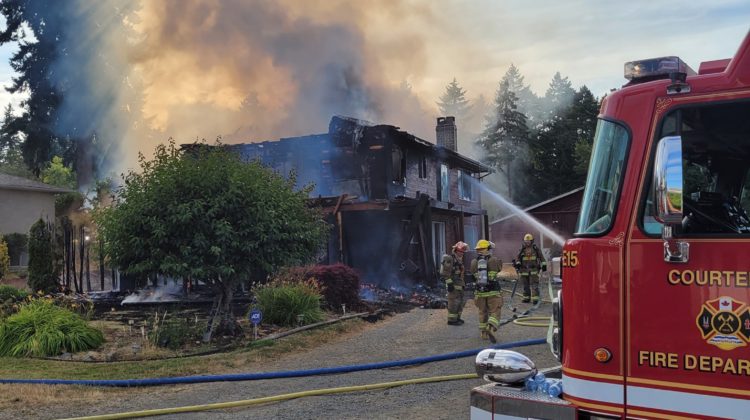 The investigation continues into exactly what caused a home to burn in Royston.

“We could actually see the smoke from the fire over by (the) Superstore while we were going out,” Bardonnex said. “On arrival, the roof, the carport, and the deck, and the fire was into the first two rooms of the second floor.”

Bardonnex said crews did a primary search of the first and second floors, and knocked down the fire once they had the hydrant fully established.

“It was probably about 10, 11 minutes after the hydrant was established, and we spent the next few hours overhauling the structure. There was nobody inside at the time.”

He added it’s always dangerous considering how dry the conditions are, and there was a garage around 20 feet behind the house, as well as a cedar hedge nearby, but “other than that it was grass fires spreading which were knocked down by neighbours, actually.”

Bardonnex said it’s believed the fire started on the deck.

“We got good witness reports and photos from before our arrival so I don’t think it will take them too long to do that (investigation),” he added.

“Nobody (was) injured so that’s a good thing,” Bardonnex said.