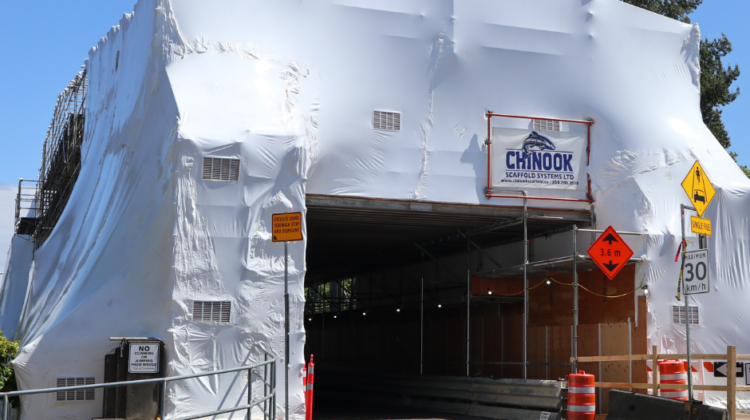 Supplied by the City of Courtenay

Drivers will have to wait just a little while longer for the 5th Street bridge to fully reopen.

Workers are making progress under the plastic wrap on the 5th Street Bridge Project.

However, the project is now expected to wrap up in November, one month after its original completion date.

The City of Courtenay says the coating removal is now well underway, and the blasting rate and condition of the bridge are better than expected.

According to the city, scaffolding installation has impacted the schedule.

“The complex geometry of the bridge scaffolding required several weeks longer than anticipated to complete,” it said in a release.

“This intricate scaffolding system is key to safely completing all phases of work while keeping the bridge open to traffic. An equipment malfunction earlier this month with the machine used to remove the paint further delayed the work by several days.”

The project team is working with the contractor to explore all options to expedite the remaining project phases, including expanding the hours of work and overlapping phases of work where possible.

Once the coating is removed, the bridge will be coated in lead-free green paint – which the city says is “the colour choice preferred by the majority of respondents following a community survey completed earlier this year.”

Following the coating repairs, crews will shift gears toward repairing the bridge deck.

Drivers of over-height vehicles including transport trucks and large recreational vehicles are reminded of the 3.6 metre height restriction on the 5th Street Bridge.

“While there are ample signs and visuals of the reduced bridge clearance, we have still seen two close calls with commercial transport trucks in recent weeks,” said Courtenay Mayor Bob Wells.

“Each of these incidents resulted in temporary work shutdowns for several hours while engineers assessed the situation and any potential damages. Of course the safety of those working and travelling on the bridge is the top priority for the City and the project team. Everyone inside and outside the bridge scaffolding needs to make it home safe to their loved ones at the end of the day.”

Alternate routes for over height vehicles include:

The city says the 5th Street Bridge Project is on track to be delivered within the approved $6.5 million budget.

The city has received $1.96 million in grant funding from the federal and provincial governments through the New Building Canada – Small Communities Fund. The remainder of the project costs will be funded by the city.