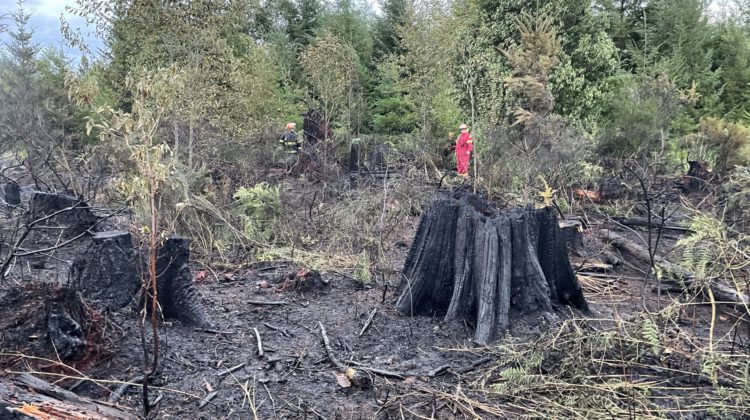 Aftermath of this morning's brush fire at fairly large fire at Lake Trail Road and the Comox Logging Road. (Supplied by the Cumberland Fire Department)

Williamson says crews were called to the fairly large fire at Lake Trail Road and the Comox Logging Road at around 4:30am.

He added that the cause is not known at this time, but neighbours heard motorcycles in the area late in the night.

Williamson said strong winds “gets us a little nervous, because winds can really move a fire quickly.”

He says considering the conditions, off-roading is not a good idea.

“Not a good time to be back there with anything hot,” Williamson added. “And motorcycle mufflers are hot and quads are hot. You could light a fire and not even know it. It only takes an ember and it can burn for a few hours and all of a sudden, bam.”

He said the fire happened near a neighbourhood with around 20 houses.

“We got out there and it was about an acre burning,” Williamson explained. “Pretty wild, high winds, probably 30 (kilometre) winds, and there was a danger of it jumping the road and heading towards those residents but it was a good location for us to knock it down fairly quickly and get it under control.”

While it took crews about 30 minutes to get the fire under control, Williamson said they were there for about four-and-a-half hours.

Williamson added that it was a combined effort.

“We probably had about 15 firefighters plus we brought Courtenay’s tender in, to make sure we had ample water because there are no hydrants out there. We used Courtenay 14’s tender, we used our tender, and a couple of engines. We had a fairly large crew out there.”