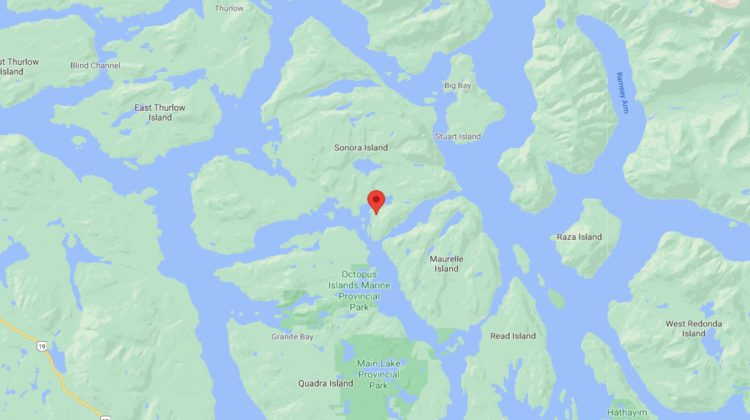 An evacuation alert remains in place for the Sonora Island community of Owen Bay, with an ‘interface fire’ now sitting at three hectares in size.

In a Friday afternoon update, the SRD says BC Wildfire Service has 17 firefighters, four helicopters, and one boat on-site, in addition to response support from local volunteer firefighters.

“We are pleading that citizens avoid coming to the area to allow resources to operate safely,” the SRD adds. “We cannot speak highly enough of the residents that came together for the initial response in an organized and caring fashion to protect their community.”

As a wildfire continues to burn in Owen Bay, the remote Sonora Island community — found just north of Quadra Island — is facing an evacuation alert.

According to the Strathcona Regional District (SRD), the alert, which came into effect at 11:45 last night (Thursday), impacts residents south of Hyacinth Lake and Dorr Lake.

It’s based upon recommendation of the BC Wildfire Service and urges locals to be prepared to flee the area at a moment’s notice, as an ‘interface fire’ currently burns at two hectares in size, or five acres.

“BC Wildfire Service personnel are working with the local Owens Bay fire brigade to fight the fire,” reads a release from the SRD. “BC Wildfire is pleading that additional citizens avoid coming to the area to allow their aviation resources to operate safely.”

At this time, residents do not need to evacuate, but they should have grab-and-go bags ready and packed with clothing, toiletries, and medications, in case an evacuation order is issued. Locals should also pack any important documents or mementos and have an emergency plan in place, the SRD notes.

As of this morning, there were 269 wildfires burning in B.C., thirteen of which were reported in the last three days alone. The Coastal Fire Centre, which covers Vancouver Island and the Sunshine Coast, accounted for 25 of those fires.

The SRD says it will continue to monitor the Owen Bay situation, providing an update sometime today. Officials say help is also available for those who might need help evacuating. For more information, call the Emergency Operations Centre at (250) 830-6702 or visit www.srd.ca/evacuations.