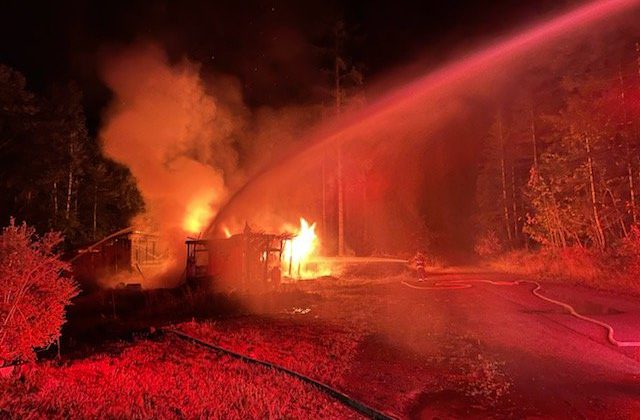 No injuries to report after an early morning blaze in rural Campbell River left a mobile home completely destroyed.

At around 1:00 am today (Monday), the Campbell River Fire Department was called to Nursery Road after someone called in claiming that their neighbour’s trailer was on fire.

But what posed a real challenge for firefighters, Bellefleur explains, was the 300-pound propane tank on site. He says the flames from the trailer were actually ‘impinging’ up against the tank. In turn, the tank was venting into the atmosphere, acting as “a blow touch blowing into the air.”

“That always presents a safety risk for the crew, so that was being addressed,” Bellefleur tells My Campbell River Now.

Ongoing dry conditions sparked another challenge, Bellefleur adds, as crews worked to prevent the fire from spreading to the nearby forest. “This particular trailer is in a rural setting right up against the forest, so crews were very quick to keep that side of the fire down and not let the forest get going,” he says.

To help battle the blaze, Campbell River Fire put out a call for reinforcements from nearby fire stations.

“In our composite fire model here in Campbell River, we do rely heavily on callbacks for structure fires. During the summer of course, with vacation time being at its peak, it’s always a challenge for us to get enough staffing to deal with these sorts of calls,” Bellefleur notes.

He continues, “In cases where we’re tapped out and have nobody left available, we call in crews from another fire department to help cover us off. We used everybody that we had available to us, so we brought Oyster River down. They were here in Campbell River helping us out, making sure that we had some resources available should something else come in. They were on standby here for a couple of hours while we were tied up.”

At this time, the cause of the fire is under investigation. Luckily, Bellefleur says no injuries were reported. “Once we were on scene, we were able to determine the location of the tenant and he was not at home. We confirmed that he was safe and out of the building,” he adds.

CR Firefighters extinguish fully involved mobile home fire early this morning off Nursery Rd and keep it from spreading to nearby structures and brush. Cause is under investigation. pic.twitter.com/rHfDDD9IJz