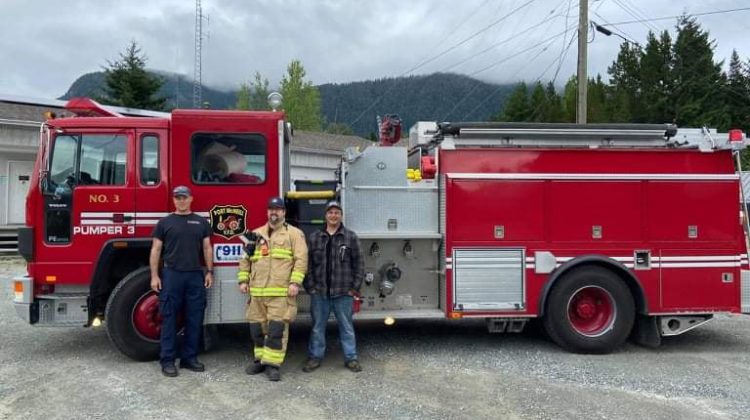 “Four firefighters were selected from the North Island,” Port McNeill Fire says, “so that no single hall would be short on members. Woss Volunteer Fire Department, Port Hardy Fire Rescue, and our own department’s firefighters will be on a two-week deployment.”

But the request for aid from local fire crews was first requested on July 20th, the same day the State of Emergency came into play. According to Fire Chief Dean Tait, the Office of the Fire Commissioner (OFC) sent a request for all available structural firefighting apparatus to be deployed to the interior.

According to Tait, “Port McNeill Fire Rescue will be able to utilize training received to protect the community and gain experience under qualified supervision, which then can be utilized when responding to an incident in their own Fire Protection Area. In addition, it will allow the Fire Department to receive training which was recommended in the Community Wildfire Protection Plan.”

Along with Port McNeill fire crews, rain and cooler temperatures are helping firefighters get a handle on several of the dangerous wildfires burning in B.C., especially the hard-hit interior.

However, officials with the BC Wildfire Service say any drying-out periods, hot weather, or high winds could allow the situation to worsen quickly.

Some of those evacuated earlier this month are now being allowed home, but thousands of people are still in shelters, and tens of thousands of others are on alert to prepare to leave at a moment’s notice.