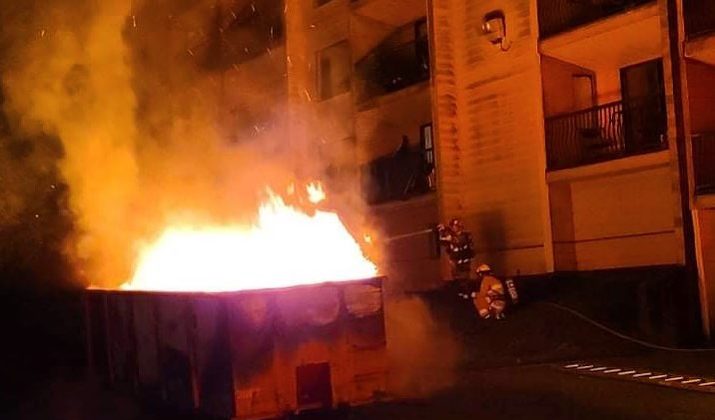 A Sunday fire prompted an early morning wake-up call for fire crews on the North Island.

At 2:40 am yesterday, Port Hardy Fire Rescue responded to a fully-involved 30-yard dumpster fire located right next to a local apartment complex.

According to fire chief Brent Borg, the flames were about 30-feet high.

“We got in there right away. We got enough water onto it to cool it off,” he says.

It could have taken a turn for the worse, but firefighters were able to put out the blaze and prevent further damage. “Crews quickly extinguished the fire and prevented any spread to the adjacent complex,” read a post on the Port Hardy Fire Rescue Facebook page.

In Port Hardy, Borg finds dumpster fires to be a rarity. “We’ll get one every few months I guess, not typically these big dumpsters,” he says. “This was a full 30-yard bin that was fully involved. They’re gutting the apartment, so it was full of lots of furnishings, I think.” An investigation into the blaze is ongoing, the fire department says, and anyone with information is asked to contact the Port Hardy RCMP. But Borg says finding the culprit won’t be easy. “There were no witnesses to it and there was nothing left of it when we got there,” he explains.

Meanwhile, a few days prior, Port Hardy fire crews were called out to their first chimney fire of the season. And although the Wednesday, Aug. 25th nighttime fire was put out quickly, Borg says it was actually quite taxing on crews.

And for Chief Borg, this blaze actually sparks an important reminder. As the days get shorter and cooler, he’s urging islanders to inspect and clean their chimneys before they ‘flash it up’ for the first time this season. “They need to give it a good cleaning before they get it going for the winter,” he says.