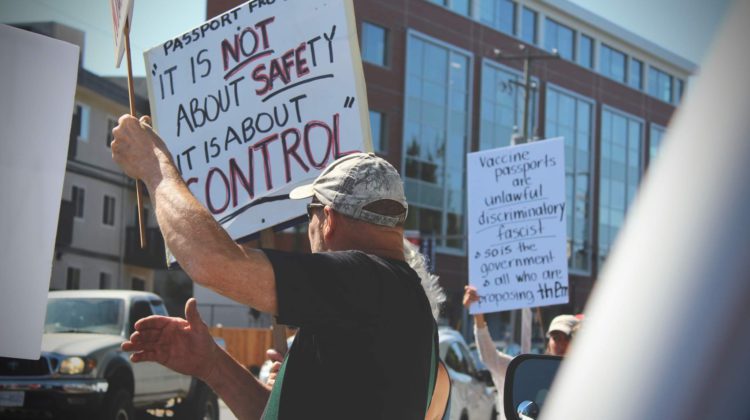 In Campbell River, hundreds flocked to Spirit Square in the city’s downtown yesterday (Sept. 1st), expressing their opposition to proof-of-vaccine, holding up signs and chanting the word “Freedom” as cars drove past.

But in Nanaimo, police say a protest outside the local hospital actually took a rather violent turn. At around 10:00 am, a crowd of roughly 300 people gathered near the Nanaimo Regional General Hospital.

According to O’Brien, the protest was “quite vocal” and lasted several hours. He says the RCMP initially responded with about eight officers but eventually scaled back to four an hour into the protest.

“We had a number of police officers there just simply monitoring it, ensuring the peace,” he says. “But we had some dialogue with them and they were asking our opinion, which really doesn’t come into play at all. We’re there to keep the peace.”

But it wasn’t all peaceful. “Unfortunately, there was one incident recorded for information only,” O’Brien notes.

Just as the protest kicked off, he says a hospital employee was walking into work. Before entering the hospital, one protestor allegedly walked by her and spat in her direction. However, O’Brien ensures the spit did not strike her.

“She carried on in her shift,” he explains. “She recorded it later that night for information only, in the event that this individual surfaced again and it escalated into more violence.”

Island Health President and CEO, Kathy MacNeil issued a statement expressing her frustration. She said what happened is “not acceptable to me nor to the people and communities they serve.” She continued, “Our healthcare teams deserve respect and support, no matter what personal beliefs we hold.”

And Premier John Horgan also issued a statement, noting that the Province fully supports healthcare workers. “While everyone has the right to peaceful protest, the targeting and harassment of healthcare workers at healthcare facilities today is completely unacceptable,” he added.

Meanwhile, there’s no word if another anti-vaccine card protest is in the works, for Nanaimo or elsewhere. However, Cst. O’Brien says, “We will certainly be reaching out to them. It’s not uncommon for the people who coordinate these events to reach out to us and let us know what’s going on.”