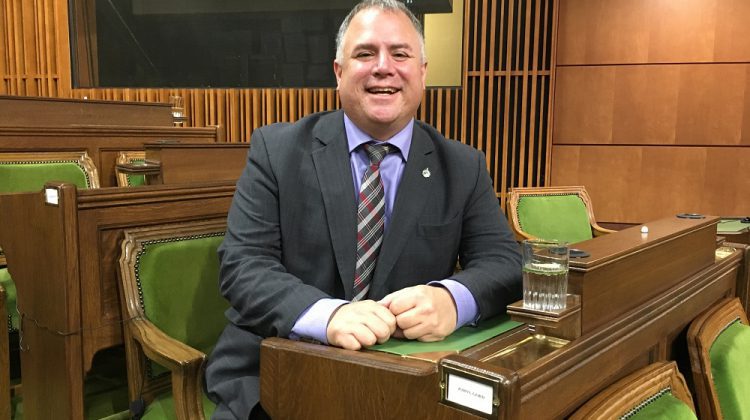 In the leadup to the Monday, Sept. 20th federal election, we’re speaking to local candidates.

We touched on three hot button issues: housing affordability, COVID pandemic recovery, short and long-term action on climate change, as well as one other topic they may have as a campaign priority.

Today, it’s NDP candidate Gord Johns, who’s running for re-election in the Courtenay-Alberni riding. (Answers have been edited for brevity).

Victoria born and raised, the 51-year-old father of three has lived in the riding since 1994 and has a deep history here. His great grandparents were married in Cumberland and his mom went to school in Parksville, Qualicum, and Port Alberni.

VR: If elected, what would the NDP do to address housing affordability?

GJ: Clearly owning a home has become an impossible dream for too many Canadians and finding a decent place to rent has become almost out of reach, too. Everyone should have the right to have a safe and affordable place to call home, and we recognize that. The Liberals pulled out of the national housing strategy in 1993. The Conservatives followed suit, developing almost no new housing, so we’re short over 500,000 units, right now. In the 1970s and ’80s, 10 percent of housing stock was non-market housing. Right now it’s less than four percent. In Europe, it’s 30 percent. We need to develop non-market housing. The Conservative offer of creating tax breaks for developers to build more housing, hasn’t worked anywhere in the world. It hasn’t worked in Canada. We need to create non-market housing so people have a safe, secure place to live. We’re committed to doing that, building 500,000 units, fixing the shortfall, and ensuring that everybody has safe, secure, and affordable housing.

VR: What is the NDP’s view on how to handle the COVID pandemic?

GJ: Clearly we saw major gaps in our healthcare system, long-term care, in terms of employment we saw young people disproportionately impacted, women particularly disproportionately impacted, we saw the gaps in supports for seniors and people living with disabilities and for all Canadians in the COVID-19 pandemic, so it’s really important that we create and make historic investments to jumpstart economic growth, to get people back to work and make life better for everyone. We need to make bold investments in our priorities, like community infrastructure and transit, affordable housing, energy efficient retrofits, Pharmacare, long-term care and training, and obviously we need a childcare plan that’s going to help support getting people back to work, especially women, and tackling our climate crisis and creating jobs through that.”

VR: What would the NDP do to mitigate climate change?

GJ: We’ve seen drought, fire, we’ve seen flooding… over the last few years we’ve seen the impacts of climate change and the best available science says that we need to take action quickly to prevent catastrophic consequences of global warming, to keep us from going above 1.5 degrees (Celsius). We’ve committed to reducing Canada’s emissions by at least 50 percent, from 2005 levels by 2030. To do that we need to set national and sectoral carbon budgets, continue with carbon pricing, and ensure the federal financial levers and crown corporations that Canadians own, are aligned with the goal of net zero. First we need to eliminate fossil fuel subsidies. Under the Liberals and the Conservatives, they’ve been rising at $900 million a year, to the tune of $18 billion this last year. We need to shift that money into investing in transition. We need to be a leader on methane reduction, we need to appoint a climate emergency committee of the cabinet. That’s what we’re pushing for as New Democrats. And the creation of a climate bank to invest in clean energy and energy retrofits. Investing in geothermal (energy) obviously is critical and taking this really as the national crisis, that it is. (And we) need to make sure that people get reliable and accessible housing that’s net zero. So we’re committing to getting to net zero in our building code by 2025, but we can’t do it without Indigenous peoples being full partners in addressing climate change, and reconciliation needs to be front and centre.

GJ: We know that we are in the middle of a climate crisis, a health crisis with COVID-19, we have a housing crisis where people don’t have a place to live, but also we have an opioid crisis. A health crisis where we have politicians that have said that they rely on the guidance of medical health professionals to give them direction in terms of policy to address COVID-19 and at the same time, those same health officials are giving them clear direction to tackle the opioid crisis: that’s to decriminalize and end the stigma, to provide a clean source to stop people dying from a poisoned drug supply, and ensure that they’re declaring it a public health emergency, and resourcing it with an appropriate response in developing therapeutic treatment centres. We need courage right now, just like Portugal took in addressing their issue, where they had the highest overdose rate in Europe and now they have the second lowest. Right now there are politicians saying that they see it as a health issue, but they are not listening to health professionals, and they’re still treating it as a criminal issue. This has (got) to change. People are dying in our communities. This needs to be addressed by all politicians and they need to be held to account.